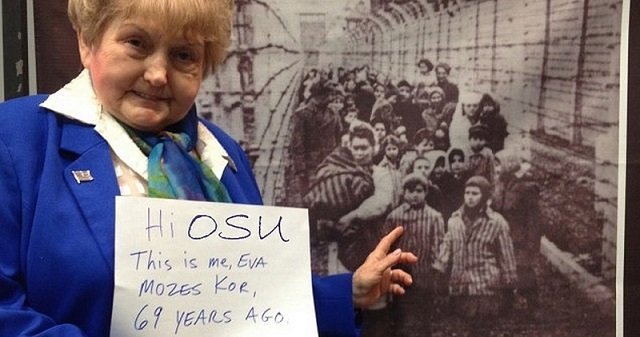 When a Jew and a Muslim Speak in One Voice, World Better Listen

Ms. Eva Mozes Kor and Mr. Mohammed Alaa Ghanem wrote a CNN Op-Ed entitled “Learn from the Holocaust and stop the massacre in Syria” everyone should read. Especially Donald Trump Jr. who has been pandering to the Assad regime through a pro-Assad, pro-Russia Syrian named Randa Kassis. When a Jew and a Muslim speak in one voice, the world better listen to what they have to say.

Incidentally, Donald Jr. does not understand what he is doing. Nothing Randa Kassis offers him, in terms of Assad concessions, would be acceptable to the Syrian people.

The Op-Ed sets the tone with a very strong argument:

Our people suffered mass atrocities in different places and times, but we are united in our shared humanity — and our desire for action to stop ongoing atrocities in Syria. Ms. Kor is a survivor of the Auschwitz death camp during the Holocaust, in which German dictator Adolf Hitler launched a systematic campaign to annihilate the Jewish people. Mr. Ghanem lived almost all his life in the Syrian capital Damascus, where some of the worst atrocities in the world today are ongoing.

When a Jew and a Muslim speak in one voice, united in their goals, the world better listen.

TFS wrote an article sometime ago we titled “Syrian People Suffering Because Nobody Lobbies For Them“.

Well, we stand corrected. Ms. Kor, a Dr. Mengele survivor, is courageously lobbying for the Syrian people. We hope her voice, and that of Mohammed Alaa Ghanem, have an impact on the Trump Administration. It would benefit National Security Adviser John Bolton and Secretary of State Mike Pompeo to read their Op-Ed. In it there is an opportunity to bring Israeli Jews and Syrian Muslims together for a united front against the evil of Assad, Khamenei, and Putin.

Secretary Pompeo, using this CNN Op-Ed as a platform, should help bring about a conference of Syrians and Israelis in which issues related to the security of both countries are exchanged. Let the Syrians understand the Israeli perspective away from the Palestinian influence. Hopefully, this kind of engagement would bear fruit if not immediately, then in the future. We have always said that real peace happens between two peoples, not between two governments.

In the meantime, our hope is that someone with influence in this administration heeds the advice of those two courageous writers. We really need to pay attention when a Jew and a Muslim speak in one voice. When one cause unites us to look for ways to coexist in peace and harmony.

At the end of the Op-Ed, both writers had a plea to express:

We implore the public not to allow their senses to be dulled and to reject the idea that the torture and killing of children is an inevitable fact of life. The starvation, the torture, the siege and the chemical attacks in Syria can be stopped. Assad’s military is far from invincible; the Israeli strikes on Syrian air defenses last month showed that. After years of appeasement-style diplomacy have yielded only more body bags by an emboldened Assad, grounding Assad’s air force is the last option left to stop the slaughter.

Are you listening Mr. Trump?

When a Jew and a Muslim Speak in One Voice, World Better Listen