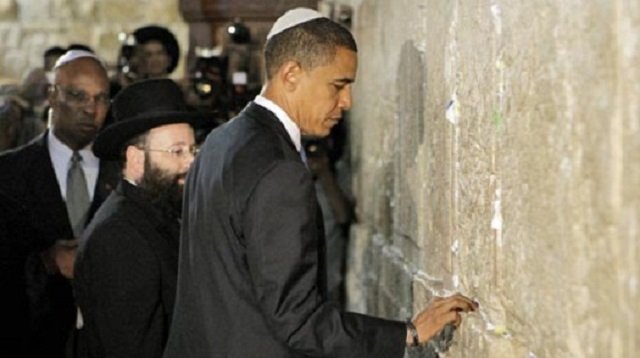 September 1, 2015 10:16 am 0
What Use is Killing Bin Laden if Policy Grows Another 100?
Even Obama’s Former Top Syria Guy Thinks The ISIS Strategy Is Aimless
ISIS Will Strike Repeatedly if Obama Keeps Ignoring Assad’s Terror

Joseph Goebbels, the Nazi propaganda criminal, is infamous for saying, “If you tell a lie big enough and keep repeating it, people will eventually come to believe it. The lie can be maintained only for such time as the State can shield the people from the political, economic and/or military consequences of the lie. It thus becomes vitally important for the State to use all of its powers to repress dissent, for the truth is the mortal enemy of the lie, and thus by extension, the truth is the greatest enemy of the State.”

Within this context, President Barack Obama should stop his Jew charade by claiming his love or admiration for Jews in general.

Ever since Obama engaged with Iran, the arch enemy of Israel, he has, on several occasions, uttered big lies about his relationships and love for the Jewish people that stand in total contrast with his Iran deal, his own ideology, and his own past connections. Barack Goebbels is practicing what Joseph taught him and it is becoming disgustingly obvious.

Grant you, probably 50% of American-Jews have been sold. Their liberal tendencies prevent them from absorbing the historical perspective of what it means to love America as Americans and to protect Israel as Jews. They either are one-dimensional mindset or they fear the backlash of standing up to their Jewishness.

To understand how much Obama hates Jews, one has to listen to Obama when he is angry, and not when he is testing Gobbels’ theory. Through his anger, one sees the real Barack Obama come out in spades.

Barack Obama should stop his Jew charade by trying to convince the 50% of American Jews, who oppose his Iran deal, that he is their friend. That train has long left the station. Considering what we know about American Jews, they are either the most skeptical people on this planet (Opposants of the Iran deal Obama is bashing), or they are a combination of fearful or uninformed Jews Obama already has in his pocket.

The ones standing up to Obama’s Jew charade are the brave American Jews who understand history and who fully grasp the danger his Iran deal would pose to America and to the only majority-Jewish country in the world. As such, Obama should stop his Jew charade.

American-Jews love this country deeply. Many have sons and daughters serving in the U.S. military and in recent wars to defend the Homeland, many have contributed immensely to the triumphs of America’s culture and exceptionalism through their mastery of the arts and sciences, and many have sacrificed much to become a respected voice in America’s political landscape.

For Barack Obama to accuse American Jews of dual loyalty because they oppose his deal is as shameful an act as any U.S. President could commit. This is the real angry Barack Obama this country should shun and will come to regret voting into office for many years to come.

President Obama never accused American-Muslims who embrace the Muslim Brotherhood ideology of dual loyalty. Is this not a sign he hates Jews?

American-Jews are Jewish. Of course, they are going to defend Israel, but never at the expense of this country. Opposing the Iran deal, in fact, shows how much they love America because this deal is harmful to America’s interests far more than it is going to harm Israel.

The same cannot be said about Barack Obama who grew up hating what this country stands for.