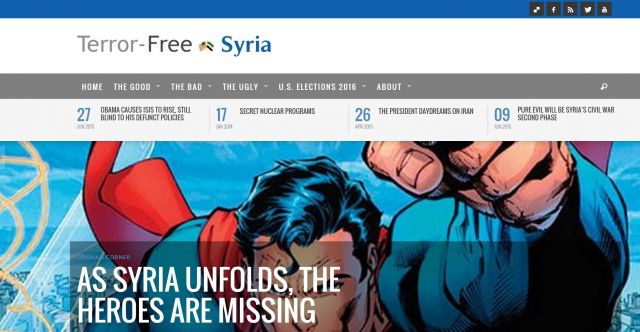 Terror Free Syria (TFS) is a US-based Syrian-American news website whose goals are to combat terror. Both in Syria and the surrounding countries. TFS stands against the Assad and ISIS terror as its stands against al-Qaeda and Hezbollah terror. Syrians have reached a breaking point with their patience towards violence and barbarism. We are tired of watching terrorists kill at will. This is our introduction to Terror Free Syria.

In this introduction to Terror Free Syria, as you read our news and opinions, you will notice we do not write to please; nor do we publish stories to get tweeted more often, or to be quoted. In fact, most of our articles and Blogs are politically edgy because we aim to confront those who empower terror without mincing our words or stifling our thoughts. We hope you enjoy our fresh approach and the ideas we present here that might make a difference.

As people descendants from a great region, we believe that political despotism, economic deprivation, and social stagnation in the Middle East have contributed significantly to the increase in domestic and international terrorism and to an Arab public policy based on abuse of human rights and the spread of tyranny.

Arab countries must begin to use their resources to educate their youths. Rulers are under obligation, morally, to provide their people with the economic opportunities necessaries to reach their potential and aspirations.

If the Arab regimes do not adapt to where the wind is blowing, the wind will blow them away. To many in the Arab world, the Arab Spring is alive until they eradicate rampant poverty, cronyism, and corruption. We would be fooling ourselves if we believed that ruthless rulers are the answer to defeating terror. Ruthless rulers feed the masses with anger, which eventually morph into resistance movements based on extreme religious ideologies.

It’s really a wonder that I haven’t dropped all my ideals, because they seem so absurd and impossible to carry out. Yet I keep them, because in spite of everything I still believe that people are really good at heart— Anne Frank

As Terror Free Syria confronts terror aggressively, we must not lose sight of our soul or humanity.