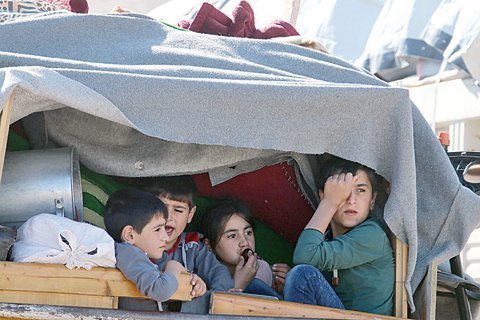 Lebanon is witnessing a Hezbollah war against Syrian children. Reuters reported that “At least 15,000 Syrian children will be at risk of homelessness if the Lebanese government goes ahead with the planned demolition of “semi-permanent structures” built by refugees in eastern Lebanon, aid agencies warned on Tuesday”

The aid agencies in question are Save the Children, World Vision and Terre des Hommes Foundation. All three issued a joint statement that the Lebanese Government, with 18 cabinet ministers out of 30 under Hezbollah’s control, decided back in April to ban all structures not made of timber and plastic sheeting. It issued an order to knock down all such structures in the border town of Arsal where Syrian refugees live.

Syrian refugees have until June 9 to make the necessary changes to their structures, after which the Lebanese Government will demolish, the statement said. Syrian refugees told Save the Children that authorities informed them a few days earlier of their April decision.

The Minister of Refugees in Lebanon is none other than Saleh Gharib, a Hezbollah puppet who takes his orders from Iran. Treachery in any other country, but bravery in Lebanon. Like the Nazi collaborators during WWII, these Lebanese collaborators with Iran will have their day of justice.

Assad’s war against his people displaced more than half of Syria’s pre-war 23 million Syrians. Some 5 million live as refugees outside Syria; mostly in Turkey, Jordan, and Lebanon under almost total control of Tehran.

In Lebanon alone. some one million Syrian refugees remain stranded. They are afraid to return to Syria for fear of retribution in Assad’s dungeons of torture and death. Now, with Hezbollah war on Syrian children, the terror organization is trying to force their return. Where? To Assad’s welcoming blood hands.

Aid agencies working with refugees have cited concerns over the loss of property and conscription into the Syrian army as big reasons discouraging Syrians from returning, along with fear of reprisals.

According to the aid agencies, in Arsal alone there are 5,682 hard structures made of concrete that are set to be included in demolition plans, hosting more than 25,000 people.

Other villages in eastern Lebanon are expected to witness similar measures.

Many of these families are very poor, barely making ends meet and put food on the table. If their homes are demolished, they have no means of rebuilding them or paying rent elsewhere. For a child who barely eats, and often doesn’t go to school, losing a home is extremely traumatic. And we are talking about 15,000 children.

The United States should have named Hezbollah a terrorist organization back in 1983 when it attacked the U.S. Marine stationed there and killed 221 brave soldiers.

When Hezbollah is trying to send children and their parents to Assad torture chambers, Israel, at one time, treated some 1,600 Syrian families for injuries sustained at the hands of the brutal Assad regime.

Who are the real enemies of Arabs, one must ask? Assad, Iran, and Hezbollah murdering Arabs? Or Israel helping Arabs in their hospitals?