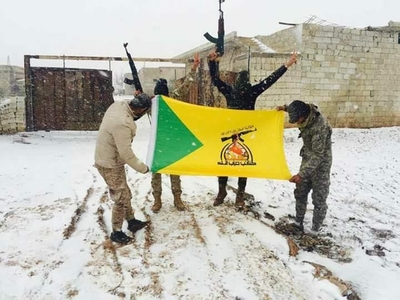 On Thursday, and despite the coronavirus, the US imposed fresh sanctions to curb Iranian terror and their proxies by blacklisting five Iran- and Iraq-based companies and 15 individuals. The latest round represents the third time the US levied sanctions targeting Iran in the last two weeks.

In a statement, the U.S. Treasury Department accused those targeted of supporting the Islamic Revolutionary Guards Corps (IRGC) and its Quds Force elite foreign paramilitary and espionage arm and of transferring lethal aid to Iran-backed militias in Iraq such as Kataib Hezbollah and Asaib Ahl al-Haq, all of which Washington deems foreign terrorist organizations.

The Pentagon blamed Kataib Hezbollah for a March 11 rocket attack that killed two U.S. personnel in Iraq; in addition to a British soldier.

U.S. officials say they plan to keep sanctioning Iran to try to force it to curb its nuclear, missile and regional terror activities despite the coronavirus outbreak, which has killed 2,378 people in Iran as of March 27.

Treasury accused those designated of “malign activities”. To include selling Iranian oil to Syria, smuggling arms to Iraq and Yemen and backing Iraqi militias that attack U.S. forces.

The sanctions freeze any of their U.S.-held assets and generally bar Americans from dealing with them.

The five targeted companies are Mada’in Novin Traders and Reconstruction Organization of the Holy Shrines in Iraq. Both are based in Iran and Iraq. Bahjat al Kawthar Company for Construction and Trading Ltd, also known as Kosar Company, and Al Khamael Maritime Services. The latter two are based in Iraq. The US also sanctioned Iran-based Middle East Saman Chemical Company.

The action also blacklists 15 individuals who are associated with the companies or officials of the Quds Force and Kataib Hezbollah.

Humanitarian supplies are exempt from sanctions. However, broader U.S. sanctions usually deter many firms from any trade with Iran.

The United States and Switzerland this year finalized a Swiss channel to get humanitarian goods to Iran.

Separately, Washington renewed a sanctions waiver letting Iraq import electricity from Iran; however, the US vowed to blacklist anyone who used it to help terrorist groups.