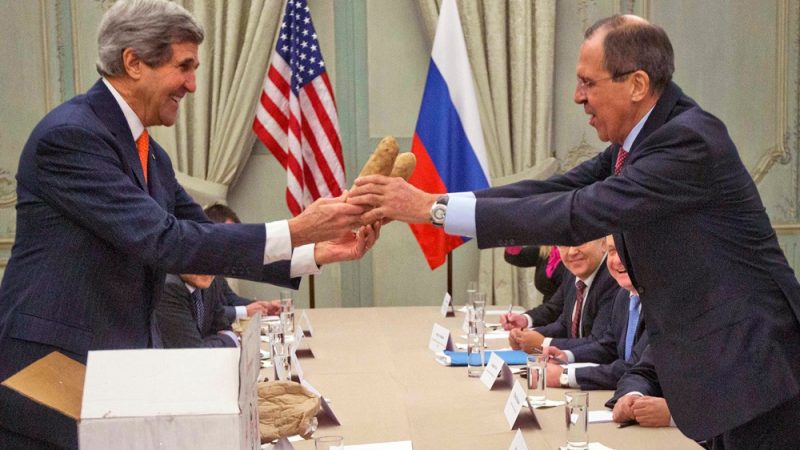 Whom Have Kerry and Lavrov Forgotten to Invite to Dinner?

February 25, 2013 12:06 pm 1
The Next Breeding Ground for Global Jihad
Donald Trump Dislikes Jews
You Will Not Believe the Latest Hezbollah Cruel Joke

Today we receive the news the Assad regime has accepted to sit down with the Syrian opposition to discuss their differences. Whom have Kerry and Lavrov forgotten to invite to dinner?

We are ready for dialogue with everyone who wants it…Even with those who have weapons in their hands. Because we believe that reforms will not come through bloodshed but only through dialogue.

Assad continues to believe he is the reformer of Syria.

Al-Muallem insisted though the regime would keep fighting the “terrorists” while dialoguing.

Early February, the Syrian opposition offered a dialogue with the Assad regime. Theirs was conditional on Assad dispatching VP Faruk al-Shara’a as the interlocutor for the regime. As well as releasing all the prisoners Assad has kidnapped, which, depending on the source, number about 200,000 prisoners. Whom have Kerry and Lavrov forgotten to invite to dinner?

This is bad news indeed; not because a peaceful settlement is not desired, but because all other options have now been terminated permanently. Not even discussing a No-Fly Zone for humanitarian purposes as SCUDS rain on civilians and while Russia and Iran keep the conveyor belt of weapons to Assad well oiled. Worse yet, those who will refuse this initiative for a dialogue will now bypass everyone to support the fundamentalists fighting to death to free Syria from Assad.

Watch the damage this wrong initiative for peace is forced into the wrong turn manned by the wrong people is about to cause.

Now that both parties accepted to speak to each other, other problems will arise; one of which is already a sore point of contention.

Where will the parties hold their negotiations inside Syria? Will they hold the talks in Damascus, still an Assad stronghold, or will they hold them in rebel-occupied territories in the North?

Even if a third neutral country accepts to host the talks, who will represent whom and how to appear victorious from the first moment the gun is fired –by insisting on their conditions– will make this an impossible diplomatic task. Maybe diplomacy believes it won, in reality, the US and the Syrian people are the ultimate losers.

Meanwhile, the killing continues, which seems to be the trajectory of a civil war left to rot.

For those fighting in Syria, and who really have the final say into the matter, they will continue to fight. I expect more funding and more arms to reach them clandestinely with the secret blessing of major Arab countries.

Maybe Obama and Putin want to see a peaceful end to Syria’s war with Assad still in power, but the Arab rulers want an end to the Iranian regime at any cost. They will not miss this opportunity the way Obama did because they know now negotiations will not curb the appetite of the Mullahs to expand their influence.

Those rulers may not say it the way the Iranian regime does, but in their tribal hearts, these are their lands. Who does the President of the United States think he is to impose anything on us!

I grew up with these rulers and this is exactly where their mindset today, which serves them on both ends: Defeating Iran and suppressing the anger of their people watching the horrors of Assad and sensing their tribal chieftains have gone Jell-O on them.

Whom have Kerry and Lavrov forgotten to invite to dinner are exactly the same people we all fear or the people that have the final say in the matter. Kerry and Lavrov forgot, somehow, that the Syrian people would back those who have defended them from Assad, not those willing to dialogue with Assad, arm Assad, or ignore Assad.

Whom have Kerry and Lavrov forgotten to invite to dinner? The ones that count the most represented by the majority of the Syrian people and those fierce rebels fighting on their behalf.

Whom Have Kerry and Lavrov Forgotten to Invite to Dinner?

Incident in Hangzhou
Saudi Arabia Should Recall Its Ambassador to the US
Is Libya Without Qaddafi Worse Than Syria With Assad?
Opinions 1017 Putin Occupation 107 Syrian Revolution 1335 Tehran John 73