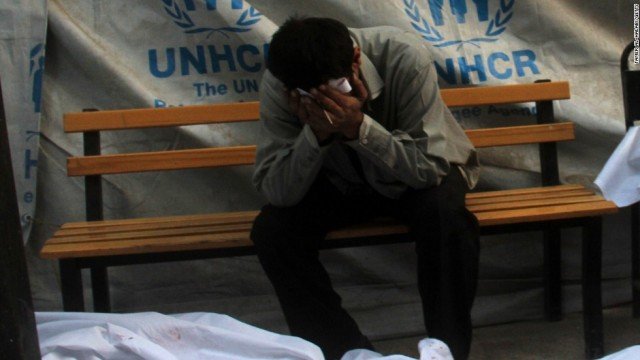 May 5, 2015 11:18 am 0
Mr President Can Syrians Borrow Some Gas Masks?
Can Obama say Ana Souri as Kennedy said Ich Bin Ein Berliner?
Syria’s Christians Fight Back Against ISIS and Assad

Attacks using barrel bombs — oil drums filled with explosives and shrapnel and dropped by aircraft — killed more than 3,000 civilians in Aleppo governorate last year, the report said, and have helped create a climate of fear.

Many terrified Aleppo residents have resorted to eking out a subterranean existence to try to stay alive, Amnesty International said, with many hospitals also moving underground in opposition-controlled areas of the northern city.

“These reprehensible and continual strikes on residential areas point to a policy of deliberately and systematically targeting civilians in attacks that constitute war crimes and crimes against humanity.”

Syrian President Bashar al-Assad categorically denied any use of barrel bombs by his forces in an interview with the BBC in February.

But Amnesty International has rejected that denial and detailed what it says is substantial evidence to the contrary.

Amnesty International says its report, released Monday, is based on the testimony of 78 current or former residents of Aleppo and 29 professionals working in or on Aleppo, with witness accounts cross-checked against photo and video evidence.

It accuses government forces of launching “continual” attacks between January 2014 and March 2015 “using barrel bombs and other imprecise explosive weapons on areas populated with civilians, including at least 14 public markets, 12 transportation hubs and 23 mosques, and on civilian objects, including at least 17 hospitals and medical centres and three schools.”

One resident, named as Firas, described in horrifying terms the results of what Amnesty said were two barrel bombs dropped by government forces on Al-Mowasalat neighborhood on November 6 of last year.

“Inside the barrel, there is a sharp plate that can cut steel, so how about the humans? They are sliced through,” he said in a Skype interview with the rights group in January.

“I saw more than 50 injured people. I saw a child whose face was completely turned to blood. Another child was holding in one hand his other hand, which had been cut off completely. He was screaming, ‘Bring it back to me.’ ”

The group said it had contacted the Syrian government with its findings in March but had not received a response as of late April.

Human Rights Watch, in a report released two weeks after the Assad interview, also accused the Syrian government of carrying out “hundreds of new indiscriminate attacks over the past year with air-delivered munitions, including improvised weapons such as barrel bombs.”

Residents of the Yarmouk refugee camp, on the outskirts of Damascus, told CNN just last monththat Syrian government forces had targeted the neighborhood with munitions including barrel bombs after it was stormed by ISIS fighters, flattening many buildings. Thousands of people still live in Yarmouk, set up as a refugee camp in the 1950s for Palestinians.

“This is Yarmouk camp, and we are not leaving our homes,” one man said. “Whatever happens, if they keep hitting us with barrel bombs, we will die.”

The U.N. Security Council unanimously adopted a resolution on Syria in February 2014 demanding “that all parties immediately cease all attacks against civilians, as well as the indiscriminate employment of weapons in populated areas, including shelling and aerial bombardment, such as the use of barrel bombs.”

But the international community has since done nothing to hold the perpetrators of continued barrel bomb attacks to account, Amnesty International said.

It concludes in its report that the violations committed by the Syrian government and many armed opposition groups in Aleppo have not only violated that U.N. resolution but also constitute war crimes.

“In some cases, the actions of the Syrian government amounted to crimes against humanity,” it said.

For its report, Amnesty International conducted in-depth inquiries into eight barrel bomb attacks, it said. It found that they had killed at least 188 civilians, with only one fighter recorded among the fatalities.

After more than four years of civil war in Syria, residents of Aleppo are also contending with a lack of basic services such as water and electricity, as well as shortages of food, heating fuel and medicines.

Assad Bombards Civilians in Douma, Again
Think Irancare
The Idiot Guide to the Syrian Revolution (in 6 Paragraphs only)
Assad Genocide 425