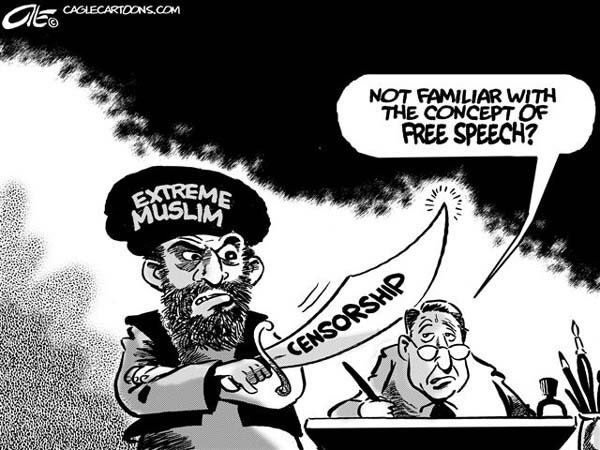 May 5, 2015 10:48 am 0
Ex-Pentagon official Harold Rhode: Muslim world must undergo thought revolution
One Big Sign El-Sisi Presidency is Temporary
Why Trump is Leading the Polls

The provocation on both sides tests our ability for tolerance. In that regard, we Muslims seem to fail every time because we have yet to see an American behead a Muslim or gun him down for his ‘Death to America’ sentiments. Why is it that our offense towards a Muslim screaming ‘Death to America’ should be any less than the offense of a Mohammad’s cartoon? Yet, Americans do not kill for it.

Actually, Death to America or televised beheadings beget Mohammad’s cartoons. They are connected to each other.

To a non-Muslim, a cartoon of Mohammad stirs no special bias or emotions one way or the other. There is no hate in a cartoon, only satire and an expression of freedom of speech. Conversely, to a fanatic, ‘Death to America’ or burning the U.S. flag stirs emotions of hate. The expression of either makes a difference because Muslim perception often neglects to understand the true meaning of freedom of speech no matter whom it offends.

In a way, drawing Mohammad’s cartoons is a poor man’s understanding of the clash of two civilizations. In its most basic crudity, one civilization is expressing the sanctity of its freedom of expression the same way chants of ‘Death to America’, now a staple diet of Muslim masses, express hate towards the other civilization.

One civilization communicates with a pen, and the other with gruesome beheadings or emotional outbursts. This cyclical assertiveness for a fundamental right on one side and the emotional outbursts and violence on the other side will not subside unless regimes like the one in Iran, whose Death to America chants are performed more often that their national anthems, and organizations like ISIS (Which took responsibility for the Texas failed act of terror) and al-Qaeda who behead non-Muslims because they were born to parents of infidels are both decimated.

America holds the reset button, but America, under the Obama Administration, believes the Death to America chants are justified. With her exposition in Texas, Pamela Gellar was really confronting the Islamists and the Obama apologist administration.

Death to America and beheadings beget Mohammad’s cartoons. Many Muslims see the connection, but the fanatics only see their 72 virgins disappear if they do not respond with violence.