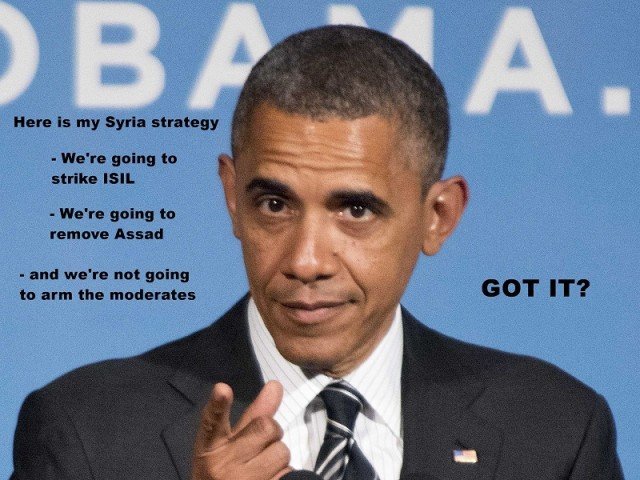 CNN published a story two days ago citing US officials reviewing the ISIL/Iraq/Syria strategy, which included also a reference to the dislodging of the Assad regime.

President Barack Obama has asked his national security team for another review of the U.S. policy toward Syria after realizing that ISIS may not be defeated without a political transition in Syria and the removal of President Bashar al-Assad, senior U.S. officials and diplomats tell CNN

Of course, it did not take long for other US officials to circumvent Assad removal as one reads further.

How many times have we been down this road where the White House threatens to do something about Syria, then as suddenly all threats dissipate in thin air.

How many times we read leaked stories that Obama intends to arm the Free Syrian Army only to find out it is all hogwash (I personally know of six different times).

How many times US Senators were led to believe there is a new Syria strategy only to discover soon thereafter, it was all a ruse.

The most famous of course is the Red Line Obama drew after Assad gassed the Ghouta district outside Damascus killing over 1,400 hapless Syrians; while many remember this particular waltz off, there have been so many more subtle threats and leaks that served only to raise empty hopes.

Syria today is a battlefield for Assad and ISIL instead of the FSA moderates governing that Obama refused to help in 2011.

Consider the Obama Syria strategy centered on striking ISIL, threatening to remove Assad, and refusing to help the moderates. Can someone explain to me what Obama is doing? You have heard of the idiom ‘there is a sucker born every minute’; well, I think tens of millions of them voted on November 4, 2008.

Just for the record, if anyone believes Obama is about to remove Assad from power, then I have 10Lbs. of Aix-en-Provence truffles to sell them for 10 bucks.

If one looks closely at cause and effect, one finds that Obama’s media Syria strategy serves only to release pressure. Obama throws his detractors a bone or two just so he can play Golf the same day without this dark cloud hanging over his halo. Obama never intended or really wanted to remove Assad from power. All he cares about is his own glory, and that glory, he believes, will shine only if he could master a rapprochement with the barbaric terrorists in Iran who burn our flags every time they sneeze and threaten to annihilate all of our allies.

In reality, Obama uses the media only to hide his own personal weaknesses and shortcomings. Reflect a bit on this statement to grasp fully how unfit Obama is to be our Commander-in-Chief. Other presidents have used the media to throw a curb ball at their foes, but not to deflect the pressure against them, and certainly not all the time as Obama does.

Why did the US officials leak the possibility of a new Syria strategy now?

It could be that pressure is mounting on Obama to focus further effort on striking ISIL, especially now that he must deal with an Obama-charm-resistant US Congress. Moreover, Arab allies are fearful of what might happen domestically if Obama continues to strike Sunni terror but not Shia terror. Their intelligence services must be capturing the terrorists dancing around their graves if true.

It could also be because the P5+1 talks, only 10 days from being concluded, are a fool’s errand Obama is just realizing. The belief is if US officials leak a story that Assad is on the table as a regime, then Iran might succumb to pressure.

I cannot even describe to you how ignorant, gullible, and naive this strategy is if it turns out to be the reason for this leak. Obama must think those ruthless men governing Iran are moved by words, especially his.

After Assad, Naivete is our Worst Enemy
Arab VP’s: Soon the Most Endangered Species
Hollande: Russia’s Intervention Will Not Save Assad
Slippery Barack Obama 976