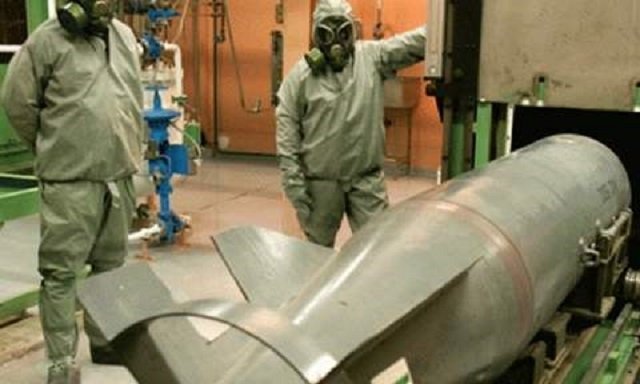 October 10, 2013 4:45 am 0
Homs is Burning because It’s not the Strait of Hormuz
Who Are the Beneficiaries of Islamic Terror?
What Assad Is Forcing Orthodox Christians To Do

The news coverage on the dismantling of the Assad regime chemical weapons program has taken front seat row in the news on Syria. The blanket is so wide and so encompassing one would think there is no civil war raging with Iran and Hezbollah in its midst killing the Syrian people.

In this atmosphere of Secretary Kerry and FM Lavrov singing to each other Harry Nilsson’s “Without You”, who is supposed to watch Assad or verify that his chemical weapons arsenal is indeed history?

Do not make us laugh by saying the Obama Administration. If we have learned anything about the last five years, it is that this White House takes the blame for nothing and will not admit any failures even though American diplomats are dying on their watch. Mr. Obama sponsored the effort, which means it is a success regardless of any real outcome.

The UN is happy to keep embarrassing logjams in the Security Council out of sight and out of mind and Secretary Ban is not about to blame Assad to spark another Security Council vote or spoil Nilsson’s tune.

These very facts are enough to know Assad, Iran, Hezbollah, and Putin are laughing their hearts out every time they think of this US administration and the US media is not about to disclose it.

Have you noticed how the US media has totally ignored the YouTube video showing Hezbollah fighters execute injured Syrian rebels (Almost 160,000 hits in 2 days)? These sideshows cannot possibly interfere in the historically disproportional scheme of negotiating with the terror masters in Tehran even though they feed into more Jihadists entering Syria.

The death of civilians in Syria has been swept under the rug in favor of a chemical weapons exercise we all know has failed already andÂ Mr. Obama’s negotiations with Iran is accelerating their deaths as Hezbollah and the IRGC continue to save Assad’s neck by fighting for him in Syria.

Unless, of course, the US media takes a responsible position by highlighting the roles of Hezbollah and Iran in Syria as Mr. Obama negotiates with these terrorists while he pretends to support the pro-western liberal Syrian opposition by pretending the delay to arm them is due to the vetting process. If only Shakespeare was around!

Fools are those who think history will be kind to them because they are good spinners able to demonstrate competency when the opposite is true.