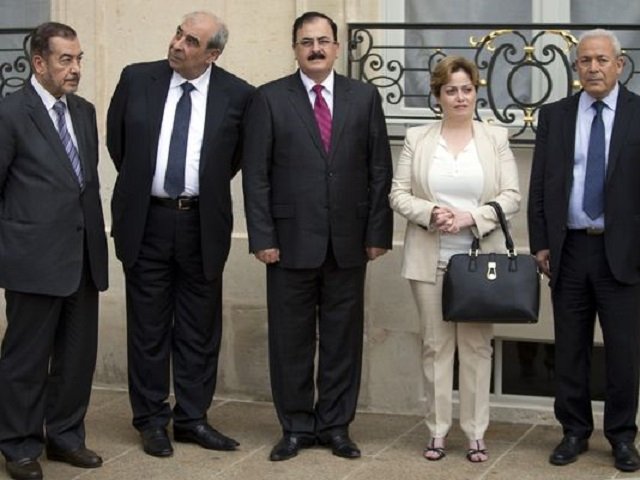 Syria’s ladies in waiting: Will a woman lead nation?

October 6, 2013 8:44 am 0
Flow of ISIS Terrorists Unstoppable Because Assad Remains in Power
A Golden Opportunity for US Intelligence to Squeeze Assad
From Damascus With Love

The modern Arab world has never known a female leader, and against all odds, Syria may be the country where it happens first. Forget Bashar Assad and the other male politicians who dominate coverage of the war-torn nation, and turn your attention to two women: Suhair Atassi and Razan Zaitouneh.

The Syrian opposition has seen its male leadership change periodically since the start of the uprising against Assad’s regime. Its main coalition abroad, the National Coalition for Syrian Revolutionary and Opposition Forces, was first under the leadership of Moaz al-Khatib, then Ghassan Hitto, and now Ahmad al-Jarba.

But these women have been leaders in the uprising from the beginning. Atassi is a prominent opposition leader living abroad; Zaitouneh is an influential human rights lawyer in hiding at home. Both have what it takes to become Syria’s chief executive ”” that is, if they live long enough to see the current regime fall.

Political dynamo and social media maven Suhair Atassi, 42, is a vice president in the opposition government and likely the most powerful woman in Syria, despite the fact that she is living in exile. A French literature major from Homs, she is no stranger to political turmoil, having been born into her country’s version of the Kennedy dynasty. The al-Atassi clan includes judges, members of parliament, ministers, poets and even two ex-presidents, including Nureddin al-Atassi, who was Syria’s president when Hafez Assad (Bashar’s father) seized control of the country 40 years ago.

Atassi’s family may have given her a pedestal from which to lead, but her rise to power has been the product of sheer persistence and courage. When she was not yet 30, shortly after Assad’s ascent to power in 2000, she established the Forum for Democratic Dialogue. It openly called for political reform in Syria, a daring demand in a country where soldiers can be imprisoned and tortured for leaving a uniform button undone.

After being arrested in 2005, when the Syrian government banned the forum, Atassi laid low and regrouped for another run. In 2009 she used Facebook to relaunch the forum – at a time when Facebook was banned in Syria – and returned to the streets at the start of the uprising in 2011, before being forced to flee Syria in 2012. Through it all, Atassi has set a relentless pace, from her constant Facebook and Twitter updates to her trips to Turkey, the U.S. and elsewhere to give speeches and to rally support for the opposition. And she has paid the price – being beaten, forced into exile and dragged by her hair into police vans during peaceful vigils for protesters in Egypt and other Arab countries.

As Atassi remarked to Al Jazeera in 2011, before the latest escalation of violence in her country, “Syria has for many years been a ‘kingdom of silence.’ Fear is dominating people’s lives, despite poverty, starvation and humiliation. We do not expect that people can easily break the barrier of fear and silence.”

The other woman striving to help the Syrian people break through that barrier is Razan Zaitouneh. While Atassi was running the forum, Zaitouneh, 35, was making her name as a human rights lawyer defending political prisoners in Syria. Not an easy task in a country that consistently ranks among the lowest in the world when it comes to civil liberties, political rights and freedom of expression.

While Atassi was forced to flee Syria, Zaitouneh chose to go into hiding after the government accused her of being a foreign agent, ransacked her house and arrested her husband. Since then, Zaitouneh, winner of this year’s International Women of Courage Award, has kept a low profile, even as she directs the leading nonviolent group working to maintain the uprising’s momentum on the ground. If Atassi represents the opposition’s public face, Zaitouneh represents its private one.

Yet this is not a case of Syrian sisterhood. Although both Atassi and Zaitouneh are leaders of the Syrian opposition, they have divergent views on the path of the uprising. Atassi engages in high-profile international lobbying on behalf of the Syrian National Coalition, an umbrella group that include, among others, members of armed rebel groups and Islamists. Zaitouneh, on the other hand, remains vehemently opposed to cooperating with Islamists, and Islamists are equally keen to avoid working with her.

But both women share the dual challenges of sexism and security concerns. In a country where resistance is shifting from the town square to the battlefields, opposition leadership is becoming increasing masculinized as Islamists and armed groups play a larger role, marginalizing the voices of women. Nonetheless, Atassi and Zaitouneh continue to fight for democracy in Syria and for their right, as women, to take part in that fight.

If Atassi and Zaitouneh outlive this volatile period in Syria’s history, their next challenge could be running for president in the post-Assad world – not only against male contenders, but also possibly against each other. A secular female activist competing against another secular female activist for the country’s top seat: Now that would be a real coup for democracy in the Arab world.

Syria’s ladies in waiting: Will a woman lead nation?