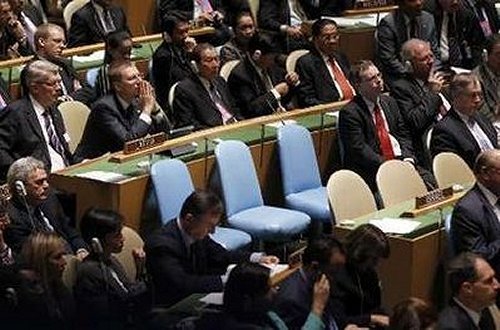 UNITED NATIONS — The morning after an aid convoy came under fire when it tried to reach a besieged Syrian city, a meeting here on a draft resolution that would force all parties in the bloody conflict to allow access for humanitarian organizations fell apart when representatives from Russia and China failed to show up, United Nations Security Council diplomats said.

On Monday afternoon, the Russian ambassador to the United Nations, Vitaly I. Churkin, did not directly say he would veto the draft if it came up for a vote, but called it “one of those political things” that would not be adopted by the Security Council. “This text would not have any practical, positive impact on the situation,” Mr. Churkin said.

The Chinese ambassador, Liu Jieyi, said Monday evening that he was concerned that a humanitarian resolution would disrupt the political talks underway in Geneva. “It’s a delicate process,” he said. He refused to say whether China would veto a proposed resolution.

A United Nations spokesman said that 11 people were killed as aid workers delivered food and medicine over the weekend to the Old City of Homs. About 800 people, mainly women, children and elderly people, have been evacuated so far, and some of them told United Nations officials that they had resorted to eating grass and weeds to survive.

A World Food Program official said on Twitter that in a measure of distress from food shortage, one family spoke of paying a one-kilogram ransom of bulgur wheat for the return of its abducted daughter.

It remained to be seen whether the Security Council would push the draft to deliver relief to the estimated 250,000 people in besieged Syrian cities and towns to a vote, forcing Russia to veto it. Council members have one eye on Geneva, where political negotiations resumed on Monday between the Syrian government and a coalition of rebel groups. They were also awaiting a briefing on Syria from the United Nations emergency relief coordinator, Valerie Amos, on Thursday.

Ms. Amos, a veteran British politician, has carefully avoided calling for a resolution, though over the weekend, she ratcheted up her outrage at attacks on an aid convoy as it entered Homs, saying on Twitter on Sunday that the international community “must raise its voice” to condemn the attacks.

The draft resolution, which was presented to the 15 Council members on Tuesday, condemns attacks against humanitarian workers, expresses “grave alarm” at the plight of civilians trapped in the fighting, most of whom it said are “besieged by the Syrian armed forces,” and deplores blockades of aid.

It specifically calls on the Syrian government of President Bashar al-Assad to cease “aerial bombardment” against civilians, including the use of so-called barrel bombs; urges rebels to dissociate themselves from terrorist groups, including Al Qaeda; and calls on foreign fighters, including members of Hezbollah from Lebanon and the Quds Force from Iran, to leave the country. It also contains a paragraph on accountability for war criminals, and proposes imposing measures on individuals and entities that obstruct aid delivery.

Only after a briefing by Ms. Amos on Thursday are Council members likely to decide whether to put the resolution to a vote. If it comes up for a vote in its current form, it is likely to be rejected by Russia and possibly China, both permanent members of the Council.

The United States ambassador to the United Nations, Samantha Power, has said that she favors a resolution.

Yet Richard Gowan, an analyst at New York University, said he was skeptical that either supporters or critics of the Syrian government would be eager to push for a measure to let in aid.

“With the Geneva talks back in session, neither Russia nor the U.S. will want a fight over a humanitarian resolution to upset Brahimi’s diplomatic efforts,” he said, referring to Lakhdar Brahimi, the United Nations special envoy who is mediating the Geneva talks. “Nonetheless, Russia will doubtless insist that any resolution must condemn rebel and terrorist attacks on humanitarian workers. While the facts of the incidents in Homs remain unclear, the image of general chaos plays into Russia’s hands.”

The effect of any resolution would be limited. Its adoption would signify that the world powers are unified in insisting on humanitarian access. And it would fall under Chapter VI of the United Nations Charter, which means that it would not threaten any use of force against those who flout it.

On Monday, the secretary general’s office refused to comment on who might have fired at a convoy of aid workers with the Syrian Arab Red Crescent accompanied by United Nations officials. “I don’t think we would want to get into apportioning blame,” said Martin Nesirky, a spokesman for the secretary general.

In Moscow, the Russian Foreign Ministry spokesman, A. K. Lukashevich, attributed the aid convoy attacks to cease-fire violations by “militants” intending to disrupt the Geneva talks.

The State Department condemned the attacks on the aid convoys, saying they demonstrate the need for a resolution in the council.

“The United States will not stop pressing for humanitarian access for these civilians, which is why we have worked with our partners on the U.N. Security Council to develop a draft resolution that includes provisions that build on the Oct. 2 Security Council Presidential Statement,” it said in a statement from Geneva.

The United Nations human rights office described the attacks as a “war crime.”