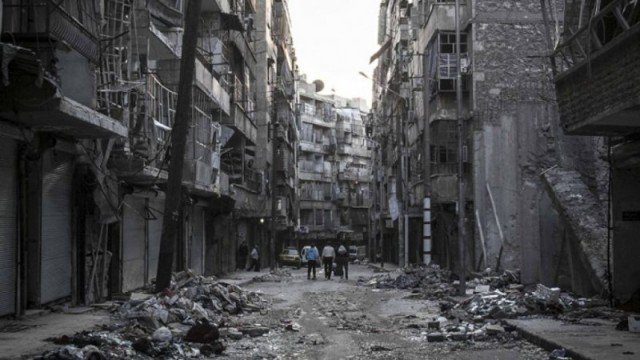 February 12, 2014 8:01 am 0
Obama Waterboarding the Syrian People
Don’t hold your breath
Excusing the Ignorance of a Jewish (Not Israeli) Blogger

The Obama administration acknowledged Tuesday that diplomacy, the main pillar of its Syria policy, is failing even as civil war is destroying the country, leaving open the question of what the United States will or can do to stop the slaughter.

Negotiations between the Syrian government and parts of the opposition are “far from achieving” a peaceful end to the conflict, President Obama said, and in Geneva, the United Nations envoy leading the talks said they aren’t getting anywhere.

“With each passing day, more people inside of Syria are suffering,” Obama said. “The state of Syria itself is crumbling. That is bad for Syria. It is bad for the region. It is bad for global national security, because what we know is, is that there are extremists who have moved into the vacuum in certain portions of Syria in a way that could threaten us over the long term.”

The president’s dire assessment, and an acknowledged dearth of policy options, created one of the most dismal pictures to date of Syria’s violent disintegration and the administration’s inability to affect events.

Obama ruled out direct U.S. military intervention, at least for now, but offered no new substitute to address a crisis he called heartbreaking and risky for the entire Middle East.

“Nobody’s going to deny that there’s enormous frustration here,” Obama said during a news conference with visiting French President François Hollande. “Right now we don’t think that there is a military solution, per se, to the problem. But the situation’s fluid, and we are continuing to explore every possible avenue.”

The ongoing killing and the deteriorating humanitarian conditions, along with the spread of radical Islamist militants taking advantage of the chaos, make Syria “one of our highest national security priorities,” Obama said.

Director of National Intelligence James R. Clapper Jr., in testimony before Congress on Tuesday, called the war, which has killed more than 110,000 and displaced millions, an “apocalyptic disaster.”

Peace talks in Geneva were 18 difficult months in the making and represent the best hope of the United States and the United Nations that the nearly three-year-old conflict can end at a negotiating table. In the absence of any appetite for deposing President Bashar al-Assad by force, diplomacy is the only strategy Obama has advanced to end the fighting.

So far, however, negotiators are talking past one another and cannot even agree on what the main goal of the talks should be.

“The beginning of this week is as laborious as it was the first week,” Lakhdar Brahimi, the U.N. envoy for Syria, said in Geneva, where talks resumed Monday. “We are not making much progress.”

The Assad government says the focus of the talks is misplaced and ignores the rising terrorist threat among the opposition forces. The United States and Syrian opposition delegates object to what they see as stonewalling at the talks, although they acknowledge a growing infiltration of rebel ranks by groups with links to al-Qaeda.

“For 10 days, the Assad delegation has refused to engage in even the most basic issues,” the umbrella Syrian Opposition Coalition said Tuesday. “The regime delegation is engaged in a stalling technique, day after day, demanding that what they call ‘terrorism’ be discussed. The truth is that, to Bashar al-Assad, a terrorist is any Syrian who disagrees with him.”

The group warned that the talks “are not open ended” but did not threaten an immediate walkout.

A State Department spokesman, Edgar Vasquez, noted on Twitter that the word “terrorism” does not appear in the document setting the terms and topics for the peace negotiations.

Brahimi said he has the patience to keep going, but the Syrian opposition and its U.S. backers complained that the Assad government is blocking deliveries of food and medicine to besieged civilians in spite of the talks.

Aid workers on Tuesday did not evacuate anyone from blockaded areas of the central city of Homs or deliver any food, the Associated Press reported. The delay increased pressure to complete the humanitarian operation before a fragile truce expires Wednesday.

Homs, Syria’s third-largest city, was among the first areas to unite against Assad after protests inspired by the Arab Spring demonstrations began in March 2011.

Relief for Homs was supposed to be an initial step to build confidence, particularly for the opposition, that the Geneva talks could make practical progress.

Tuesday’s holdup came a day after U.N. officials pushed for, and won, an extension of a three-day truce that began Friday. More than 1,100 civilians have ben evacuated, but hundreds remain.

“What happened in Homs over the past few days is unacceptable,” Vasquez said Tuesday. “While we welcome civilian movements and the delivery of humanitarian assistance, the process for getting there was far too long,” and the operation was hampered by Syrian forces that “clearly did not want lifesaving humanitarian assistance to get in.”

The Geneva peace talks are expected to continue, but Clapper summed up expectations as “modest.”

The Obama administration has cautioned that a political bargain to end the war will take time, but the fractious atmosphere at the talks has been sobering for U.S. officials. The dispiriting results followed similarly underwhelming progress toward the elimination of Syria’s chemical weapons.

A surprise deal last year to rid Syria of deadly chemical agents was the first real diplomatic achievement of the war, although it did not further the U.S. goals of getting rid of Assad or ending the fighting. Civilian deaths from a nerve gas attack last summer shocked the world, but the vast majority of deaths in Syria have been caused by bombs, missiles and other conventional weapons.

Both diplomatic efforts rely on the Assad government’s cooperation. The Obama administration accuses Syria of deliberately slowing down delivery of toxic material for destruction and is leaning on Assad ally Russia to demand faster work. Obama acknowledged Tuesday that Assad has “missed some deadlines” in the chemical weapons effort.

There is little else Washington can do to force compliance, and any international punishment for failure would require action by the U.N. Security Council.

Assad’s forces have the upper hand but have been unable to beat back a persistent and well-supplied rebel force. And the effective stalemate could be “prolonged,” Clapper told the Senate Armed Services Committee.

“The regime doesn’t have the staying power to hold on to the areas they clear, and with the external support to the opposition, they will continue to be a thorn in the side of the regime,” he said.

You can’t comfort the afflicted without afflicting the comfortable
Message to the CIA: When the Attack Dog is at Your Throat, Don’t Fiddle with his Cage Key
Obama biggest danger to America and her allies
Syria News 1027 Syrian Revolution 1348