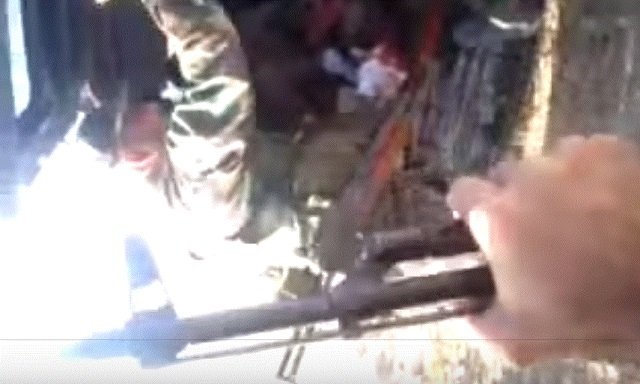 Obama Is Negotiating With Hardcore Terrorists

Obama is negotiating with hardcore terrorists.

A new video (See it below), posted yesterday on YouTube, shows Hezbollah fighters dragging injured Syrian rebels and killing them on the spot. Heads explode and bodies go still.

Please do not watch the video if you faint easily. Most than likely, the President knows very well what the Ayatollahs in Iran are capable in terms of terror. Yet, he insists on conceding to that terror for the glory of a legacy that will be written with the blood of innocent women and children.

In one day, the video has garnered more than 125,000 hits and we bet our Beatles White Album if 1,000 of those who viewed the video are not finding their way into Syria to confront the Hezbollah fighters.

More and more extremists are heading for Syria to confront the atrocities of the Assad regime and Iran’s proxy Hezbollah. The war in Syria is about to get dirtier and much messier because Sunni Muslims are not going to roll over for the Shiite terror of the Iranian mullahs. Obama is negotiating with hardcore terrorists, which makes it easy for Sunnis to turn as violent.

Violent Islamism represented by Iran and Hezbollah in Syria are blessed by this White House; the more violence, the quieter the officials in the Obama administration get. We truly believe they think their silence will make the Syria tragedy go away.

Confronting terror and Islamism means Mr. Obama has to lead. May we drown in our own sweat for thinking such thoughts.

Obama is negotiating with hardcore terrorists. They are Islamist terrorists of the first order who would not hesitate to kill Americans the way we saw happen in Iraq between 2003 and 2007.

What else can we expect from the ignoromaniacs governing America today?

Obama Is Negotiating With Hardcore Terrorists