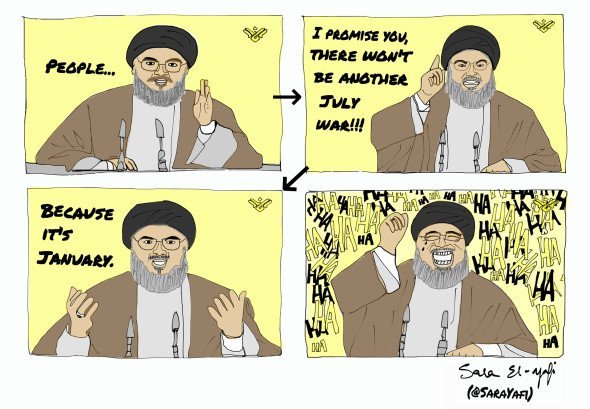 Hezbollah’s Estimated Value May Be $1.75 Trillion

The Arab Spring may have been the prelude for either enlightenment or a far more sinister outcome. Judging from the landscape political view before us in the region, apocalyptic would be a better description.

Let us turn the clock back to a US President delivering a speech in Cairo he believed could stop evil cold with his charisma. Instead, the President unwittingly injected Islamism with steroids by inviting the Islamists of the Muslim Brotherhood to take front seat row at the hall where he delivered his speech. If there were ever an expression to describe this gargantuan faux pas, our choice goes for “Sorrowful Ignorance”. The underlying message the President clearly communicated to the Islamists is “iTune for you”. Do not expect anyone at the US State Department who advised the White House or went along with this scheme to raise his or her hands to take credit.

While many, including myself, saw the Arab Spring as the prelude to Renaissance, others discounted its viability because of the grip Islamism has on the region. My position has always been that Renaissance is impossible as long as tyranny and cronyism rule the Arab masses by default. Had Obama pulled the economic card from his quiver rather than the Islamist card, today’s theater may have been far different. Inexperience by a US President has dire global consequences.

The Christians, the Alawites, and the Druze should not be paying the price for the extremism of maniacs on either side. Nor should the moderate Shias or the moderate Sunnis who see the value of humanity amongst each other as the driver of relations and co-existence, My concern for the Israelis has somewhat diminished because Israel is as strong as ever, but my concern for discrimination against the Jews remains on alert. The stronger Israel becomes the more evil against the Jews shows its ugly face.

Since the early eighties, Iran has been fortifying outposts in anticipation of this war by duplicating the success of Hezbollah’s template in many Arab and non-Arab regions. In the meantime, Arab Kings, Princes, Emirs, and Sheikhs have been squandering their opportunities (Watch this amazing video to witness what has been happening while Iran fortified Hezbollah). Why this strange behavior other than for its carnal impulses? Because Arab rulers believed they bought the West with their money to defend them at a drop of a hat. The symbolism of all these US Air Bases laced like pearl necklaces across the Gulf is but one sign of their own destiny.

Now comes a new generation of American political voters who tied the word “intervention” with “WMD in Iraq”. Even the hawkish Republican Party is adopting a new non-intervention doctrine, which have led to much suffering in Syria and will lead to much suffering elsewhere. Be it as it may, the Arab Emperors find themselves wearing no clothes.

Consider these statistics. Arab Gulf countries control the top global sovereign wealth funds. UAE ranks as No. 2, Saudi Arabia as No. 4, Kuwait as No. 6, and if you merge the four largest funds China controls, Qatar ranks as No. 8. Their total reserves exceed $1.8 Trillion while Iran’s sovereign fund is less than $50 Billion.

Therefore, we believe that Hezbollah’s estimated value to be around $1.75 Trillion in terms of Opportunity Cost. In real value, even if you discount a Trillion for the terrorist label it earned so valiantly, Hezbollah’s investment over time far has far exceeded its expectations.

While Iran fortifies, Arab rulers chase fireflies. Time for them to spend real money to defend against Iran by building their own national army if they are eager to protect their self interests.

Hezbollah’s Estimated Value May Be $1.75 Trillion