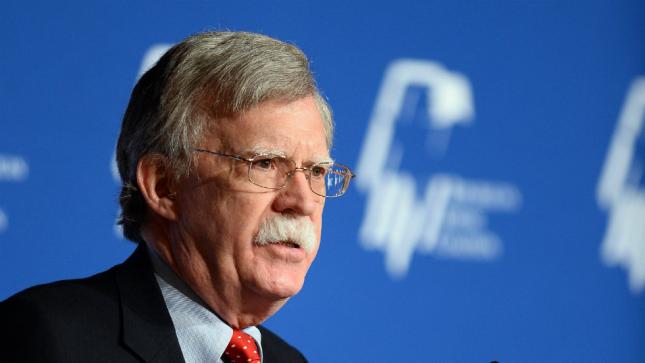 The appointment of John Bolton as the new National Security Adviser shook up Washington. More so, it horrified the Mullahs in Iran. No other policymaker in Washington is as capable of setting the course for regime change in Iran. But what about Syria, many are asking. We believe Bolton expected Syrian strategy is tied to dismantling the Iranian Regime. Here is what we believe the new Syria policy might look like.

First, let’s set the notion of Syrian regime change aside. It will not happen. The mistake of removing Assad, as we removed Saddam, will not be repeated until the head of the snake in Tehran is chopped off. Many good options for Syria become available if the Mullahs in Tehran are forced into exile or hanged for their crimes against humanity.

A Foreign Policy article describes Bolton’s first order of the day most likely under way as we speak.

Incoming National Security Advisor John Bolton and people close to him are expected to launch a massive shake-up at the National Security Council, aiming to remove dozens of current White House officials, starting with holdovers from President Barack Obama’s administration, according to multiple sources.

Good riddance. Those bastards gave us an Iran Deal that spread Iranian terror like wildfire across the region. They, and Barack Obama, are responsible for refusing to help the Syrian people defend themselves from the Assad atrocities. Obama, to please Iran, ordered all of our allies not to ship any weapons the Free Syrian Army needed to defeat the regime. These holdovers also refused to help the Iranian people when they rose against their oppressors in 2009. They are circus clowns whose focus is always on appeasing our enemies.

Iran and North Korea will most likely occupy much of Bolton’s time. With Iran, we believe he will go for the jugular by implementing whatever policies are necessary to remove the regime from power. Already, the Mullahs have scampered to Beijing and Moscow for cover. The Bolton expected Syrian strategy is tied to dismantling the Iranian Regime first.

A regime change in Tehran will open many options for the region all of which will bring more stability and peace. Yemen? The Saudis will hold peace talks to find a sensible solution. Iraq? The pro-Iran militias will dismantle and the treacherous politicians who spied for Iran will run for their lives. More importantly, it will open two new options in Syria and Lebanon we believe will change the region for good.

Without Iran by his side, Assad will scurry even more towards Putin. There is a limit to Russian cover for Assad. If Putin believes it serves his interests to exchange one Alawite for another, he will not hesitate a moment. Without Iran, Assad’s proclivity to negotiate a settlement in Syria will increase exponentially. If we had to guess what Bolton might do, Assad might stay if: 1) Hezbollah is disarmed completely using an Arab constructed army to force Hezbollah into submitting its weapons, and 2) U.S. led inspection and removal of all Syrian WMD, long-range missiles, and any infrastructure that could threaten the region. Under those circumstances, we see Assad negotiating a ninth live for himself with a Bolton nod.

Another option would be to dismantle completely the Assad regime with the condition that no Islamist Government will take his place. Erdogan will have to sign off on this option. If he does not, Assad will remain in power.

We do not see any other sensible Syrian strategy without first experiencing a complete regime change in Iran. All depends on the removal of the Mullahs and the dismemberment of the IRGC.