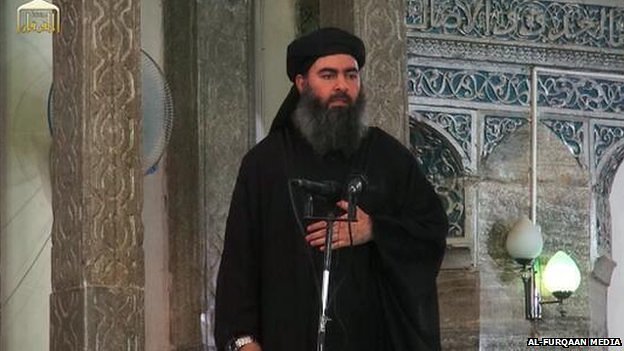 Falafel called me to let me know he is interviewing Abu Bakr al-Baghdadi of the Islamic State.

Falafel never ceases to surprise me. He pulls these amazing stunts all the time. I asked him where.

Falafel: “I think he is in Syria. He is sending a limo shortly”

A limo in Syria is a pick-up truck with a 50-caliber gun mounted in the back, a foul-smelling driver, and several blindfolding hoods. No Whisky.

With that, I told him to be careful. Trust in the Middle East is a deadly sin.

Later, Falafel let me hear a partial recording of the interview.

Falafel: “Thank you Sheikh Abu Bakr for granting me this interview”

Abu Bakr: “I am Caliphate. No Sheikh. This is propaganda interview OK? I want you send to America to MSNC. Ok?”

Falafel: “People here tell me they have no right to express their opinion. They are afraid of being shot. What do you say to that?”

Abu Bakr: “People speak here, then we shoot them. We don’t shoot before speak. We not savages like Assad”

Falafel: “Where did you learn to speak English?”

Abu Bakr: “In Gatamo. Professor from Havard come every week. English good, no?”

Falafel: “What do you think of America bombing your followers in Iraq?”

Abu Bakr: “No problem. We are factory. Make babies like America make, how you say, Hishy chocolate?”

Falafel: “Some say you are waterboarding the American hostages you are holding. What do you say to that?”

Abu Bakr: “Not true, some want to drink when sleeping on back so we say yes. We love Americans”

Falafel: “Why not release them back to their families, anxious for their safety?”

Abu Bakr: “They free to go. They don’t want”

Falafel: “Where are they? Can I talk to them?”

Falafel: “Why did you lay siege to the Christian communities in Mosul and burn their churches?”

Abu Bakr: “Not true. This is Zionist speak. We want pray with infidels. Infidels burn Churches so we don’t pray there. We like infidels”

Falafel: “But I spoke to so many who said you starved them”

Abu Bakr: “Why you speak like Zionist? We want to marry Infidel women. When said no, I said no food. Why say no to Grand Caliphate. I honor infidels when marry infidel women”

Falafel: “What about the Yazidis? Why are you converting them to Islam?”

Abu Bakr: “Because Islam and guns is one. Guns to head, convert quickly. Very easy, no?”

Falafel: “You know there are stories circulating that you force women and subject them to slavery”

Abu Bakr: “This is Zionist propaganda. We love women. All our wives are women. What proof more you want?”

Falafel: “Why did you accept to be interviewed?”

Abu Bakr (sound of a laughter): “We want good image of Islamic State. Everyone say we barbaric”

Peace, the right way
A wave turns into a tsunami of terror
While Syrians are Massacred, the Arab League Waves a Finger
Political Satire 107 Radicalism 549