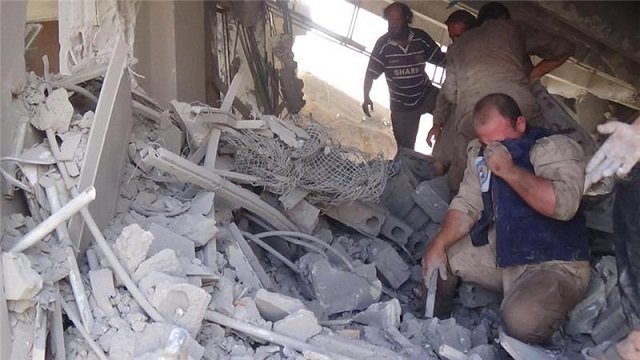 When Syrian Refugees Become a Weapon of War

At $37 a barrel, Iran and Russia are suffering lost income their economies cannot afford to lose, especially that their reserves will be unable to close any deficits past 2016. This painful strategy is the reason why Assad barrel bombs Syrians to force them into refugee status in Turkey, Jordan, and Lebanon. Coming to their help requires billions of oil dollars the Syrian regime is using to avenge the low oil prices. Already, the UN is appealing for $8bn to meet its obligations to assist the Syrian refugees in 2016 alone. Most will be paid by the United States and the Arab Gulf countries.

Russia and Iran suffer from low oil prices Saudi Arabia is imposing with its “swing producer” status and rich Arab countries suffer from funding the UN to help the ethnic cleansing war Assad started as a weapon of war. However, it is a losing game for both the Russian and the Iranian economies as both suffer irreparable damage from oil selling at $37. The Iranian Parliament voted for a budget in 2016 that assumes oil prices at $100 for 2015, and oil prices to fluctuate between $60 to $65 a barrel for 2016. In both instances, they had to adjust their budget downward and suffer the consequences of their optimistic outlook. .

In February of 2015, The Daily Mail described the Iranian economy this way:

The Islamic republic has been among the worst hit oil exporting countries because of the sliding price of crude, given that its current budget was based on sales of $100 a barrel.

Against this backdrop, Russia is hitting back by driving more Syrian refugees into Turkey and Jordan. Its campaign against Jabal al-Akrad and the Turkmen is well documented. BBC wrote both have been taking flight from Russian bombing:

Since Russia began air strikes on the Turkmen mountains in north-west Syria last month, nearly 5,000 people from the country’s ethnic Turkmen minority have fled their homes.

Using humans as a weapon of war is a war crime that no one at the UN dares confront Putin with. As long as Russia is still bombing in Syria, the result is more suffering for Syria’s inhabitants because the aim is ethnic cleansing through forced migration.

2016 is going to be a very decisive year for Syria. This is when Russia will have no choice but to throw the towel because it can no longer sustain its economy on $37 a barrel of oil and all its reserves are depleted. It can momentarily raise funds through the privatization of Rosneft but this will bridge Russia for another year or so of losses.

Other than privatization, Russia is hoping that the oil Fracking industry in the United States, which initially flooded the market with oil because of its innovative technology, will go offline gradually due to an average base of extraction costs hovering around $60. If this happens, oil supplies will become more scarce which will force prices upwards.

Of course, Saudi Arabia could respond by bringing the Fracking industry back online in time to keep oil prices around $65 a barrel, which still jeopardizes the Russian and the Iranian economies in the long run.

Russia knows this is a game it cannot win, yet it continues to use the Syrian refugees as a weapon of war, which is reason enough to call for Putin to face a war crime tribunal. Putin is not fighting terror, instead he is cementing the Assad terror the Syrian people and most Arab countries have long suffered from.

When Syrian Refugees Become a Weapon of War