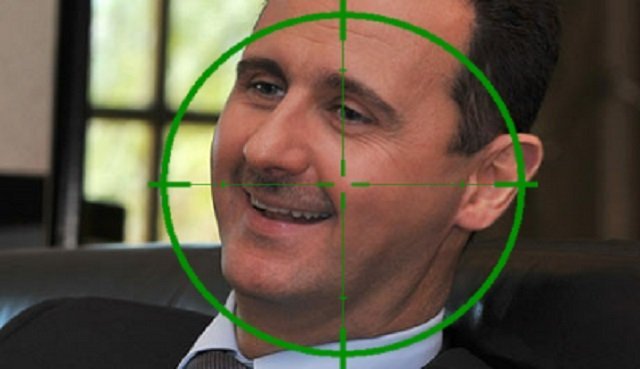 Israel Should Assassinate Assad With or Without United States Help

Iran survives on chaos when it creates it for a certain purpose. It also survives on order and stability when it needs it to prepare for chaos. The West, on the other hand, retreats with chaos and hibernates with stability. Permitting the Mullahs to operate within those two parameters has pushed Iran to the point of threatening the whole region. For the West to limit Iranian terror, it must control chaos. As such, Israel should assassinate Assad with or without United States help.

Why assassinating Assad might turn the tables on Iran?

There is no doubt Iran is preparing Syria as a launchpad against Israel. Israeli random attacks on certain Iranian military installations and assets inside Syria might delay the inevitable, but it will not stop the coming war between Jews and extremist Shia Muslims. In Iran, we are talking about a slow moving, unstoppable juggernaut with an evil purpose.

If Assad is assassinated, thus creating unexpected chaos, the first order of the day for Iran is to insure the Syrian Government remains friendly to its occupation. While it builds its war machine, Iran will have to look sideways to control the fallout. To find or agree to his replacement while dealing with Vladimir Putin who may have different ideas after Assad. Regardless, Assad assassination will create a chaotic situation that takes away the stability Iran seeks today in Syria to control situations and to produce scenarios.

The dangers in such a move are many. Both Russia and Iran might contemplate retaliation, but neither will start a war that could drag the United States war machine. U.S. drones, cruise missiles, and smart bombs are not a match for some of the dilapidated hardware both nations exhibit. Even Russian S-400, which defends its troops in and around its base of Tartous, might not deploy when the fight is over 200 kilometers away in Damascus. When it does not threaten Russian troops or presence.

Besides, Putin has already designated Assad’s replacement in the name of Col. Suheil al-Hassan. Risking a war when a new man is waiting in the wings escapes logic. Therefore, Israel should assassinate Assad because the risks are manageable.

A new man will bring in a new team, a new leadership. One that might not be fully in agreement with Iranian hegemony and control now that Russia has committed to fully to its Syrian protectorate. Remember that Iran was already fighting for Assad in 2012, but Russian intervention only fully developed in late 2015. A new leadership might stick to Russian protection and ask Iran, with Putin’s blessing, to leave the country.

The last thing Vladimir Putin would want are religious zealots screaming for Jewish blood when and if the situation settles down in Syria. In fact, Israel assassinating Assad might just help Putin. He no longer would risk more vetoes at the United Nations for a man the world over hates. Assad murder might also calm a Syrian population reeling from his terror and chemical attacks; as well as an Orthodox Church feeling the heat from its association with a mass murderer.

As for the United States, some institutions will get angry at Israel — because some still believe they control outcomes in Syria when Obama long ago has rescinded that American privilege. Donald Trump will have no choice but to stand by Israel. If he oscillates or becomes unruly, the U.S. Congress will have to fully support Israeli action. Its vote to deploy American drones and missiles, Saudi Crown Prince Mohammed bin Salman will be more than happy to pay for, will not disturb their constituents. Assad departure helps the Saudis fortify their political and diplomatic positions. It gives them a seat at the Syrian table if the United States plays its cards right. As such, Israel should assassinate Assad with or without United States help.

A new Syrian strong man might just cause the kind of chaos Iran does not expect. The kind of chaos that could derail it from the stability it seeks to keep moving its ship of terror to crash on Israeli shores. It might even create the conditions for liberating Syria from its terror by reversing Barack Obama willful intent to harm Israel.

Israel Should Assassinate Assad With or Without United States Help