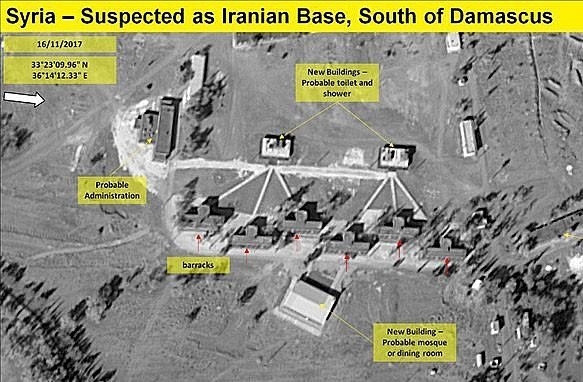 March 13, 2018 4:08 am 0
Hezbollah Is Lebanese But Takes Orders From Iran
Leaderless Iraqis Are Courageously Rising Against Iran
Iran is Turning Iraq Into Killing Fields

Last month, The Times of Israel published an article by Michael Bachner citing that Iran built ten military bases in Syria. Two of which are close to the Syrian-Israeli borders.

Iran operates 10 military bases in Syria and is training militias loyal to President Bashar Assad’s regime for a possible battle with Israel, with two key facilities located near the border with Israel, an analyst for an American think tank said in an article published Monday.

No one doubts that, if given the opportunity, the IRGC terrorists would inflict pain upon Israeli women the way they inflicted their terror upon Syrian women. Their signature achievement in Syria is the rape, torture, and en masse killings of child-bearing Syrian women. Unlike Syria where the civilian population was left to suffer by Barack Obama, Israel is not about to let the Khamenei terrorists duplicate their war crimes in Israel.

Up to 20,000 fighters from various militias throughout the war-torn country have been trained by Iranian military personnel, giving Tehran its “true muscle” in Syria, according to the Monday report in The New York Times.

Twenty thousands is the primer. It is highly likely that Iran may have more ambitious plans in the future to embed itself in Syria in ways that it could resist eradication even if the U.S. and Russia became allies. Iran invading Syria is equivalent to the Romans invading the Celts with one exception. Instead of promoting order, Iran intends to promote violence and chaos.

While Iran boosts itself in Syria by building military bases, secret tunnels, underground munitions depots, and inconspicuous training facilities, our preparations for a response has been either too secretive or too timid. Trump is a non-interventionist president, but he is also a staunch supporter of our allies overseas. Unlike Barack Obama who saw Israel as a thorn, Trump sees Israeli democracy as a beacon in this dark corner of our planet.

For the U.S. to support Israel in destroying these bases is not enough. Iran would rebuild them in no time. We must have contingency plans to uproot Iran from Syria. As we all know, Barack Obama played a major role in implanting Iran in Syria.

The United States must continue to press the Iranian people to rise against their tormentors the Mullahs. In certain far flung Iranian territories, there are oppressed minorities willing to bear arms against the regime if the United States is a willing partner. Does the time to deliver and train these minorities represent the secretive plans of the United States? We don’t have an answer for this question. We hope so.

Once the Mullahs feel the danger at home, their bases in Syria become volatile and vulnerable. Maybe Iran built ten military bases in Syria, but Iran cannot protect these Syrian bases, or its presence in Syria, if civil unrest at home is weaponized to give the people of Iran the chance to rise and win against their oppressors.