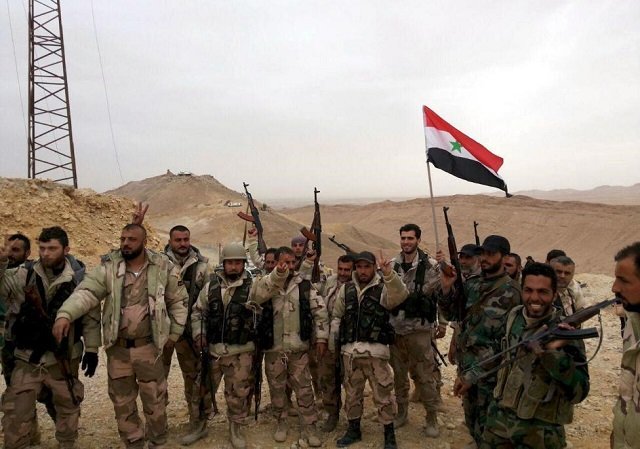 Syria’s Dilemma: One Terror Out, Another Takes Its Place

Syrian government forces recaptured Palmyra on Sunday, state media and a monitoring group said, inflicting a significant defeat on the Islamic State group which seized the city last year and dynamited its ancient temples. Syria’s dilemma: One terror is out, another one takes its place.

Syrian television quoted a military source saying the army and its militia allies took complete control of the city and were clearing mines and bombs laid by the militants.

Activists on the ground said there was still gunfire in the eastern part of the city on Sunday morning but the bulk of the Islamic State force had pulled out and retreated east, leaving Palmyra under the the psychopath Baschar al-Assad’s control. Syria’s dilemma: One terror is out, another one takes its place.

For government forces, the recapture of Palmyra opens up much of Syria’s eastern desert stretching to the Iraqi border to the south and Islamic State heartland of Deir al-Zor and Raqqa to the east.

It follows a three-week campaign by the army and its allies on the ground, backed by intensive Russian air strikes, aimed at driving Islamic State back.

Russia’s intervention in September turned the tide of Syria’s five-year-old conflict in Assad’s favor. Despite its announcement that it was pulling out most military forces two weeks ago, Russian jets and helicopters carried out dozens of strikes daily over Palmyra at the height of the clashes.

The activists said 400 Islamic State fighters died in the battle for Palmyra, which he described as the biggest single defeat for the group since it declared a caliphate in areas of Syria and Iraq under its control in 2014.

The loss of Palmyra comes three months after Islamic State fighters were driven out of the city of Ramadi in neighboring Iraq, the first major victory for Iraq’s army since it collapsed in the face of an assault by the militants in June 2014.

Islamic State has lost ground elsewhere, including the Iraqi city of Tikrit last year and the Syrian town of al-Shadadi in February. The United States said the fall of Shadadi was part of efforts to cut Islamic State’s links between its two main power centers: the cities of Mosul in Iraq and Raqqa in Syria.

The activists said around 180 government soldiers and allied fighters were also killed in the campaign to retake Palmyra, which is home to some of the most extensive ruins of the Roman empire.

Syria’s Dilemma: One Terror Out, Another Takes Its Place

When one email makes it all worth it
Have Iranian Military Casualties in Syria Become Domestically Unmanageable?
Trash Obama Worthless Words on Syria
Syria 450 Syria News 1210 Syrian Revolution 1352