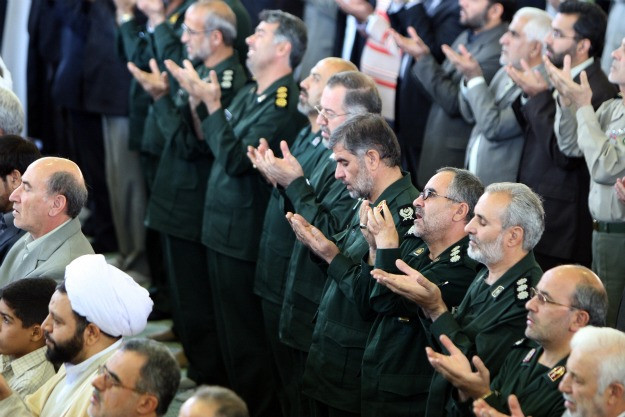 Time to Strike the Mullahs in Tehran

Iranian backed-violence against U.S. bases in Iraq and the cold killings of Iraqi protesters, in addition to the Mullahs’ readiness to use violence in Lebanon, is a wake-up call for our national security. Standing down while Iran freely causes death and destruction in the Middle East is no longer an option. The United States must consider seriously the opportunity that it is time to strike the Mullahs in Tehran.

According to the latest response from the U.S. military, this option might just be the one being discussed seriously in Washington today. Reuters writes:

TIME TO STRIKE THE MULLAHS IN TEHRAN

Iranian disposition to dish violence against others has yet to be challenged. Since 2008, when President Barack Obama opened America’s political goodwill and purse to the savages in Tehran, the Khamenei regime has been on a tear to invade and occupy Lebanon, Iraq, Yemen, and Syria. Leaving behind it a trail of blood and carnage.

The Mullahs have never tasted violence against them, and in their own backyard. They never experienced a missile flying overhead heading towards their centers of power. It might be just the medicine to stop Iranian bloodshed in its tracks because nothing would hold Khamenei’s feet to the fire than to feel the wrath of the US military burning down his brutal institutions. To help the U.S. military in its quest, the United States must launch a new campaign to show Iranian violence against its bases. We must prepare ourselves today for that eventuality. The preparation alone might force Iran to stand down.

Many in Congress and our national security apparatus fear the Iranian response in terms of direct missile launches or to a lesser degree a new campaign of terror against U.S. troops stationed across the Middle East. During an election year, Iranian calculations are simple and straightforward: Drag America into defeat.

However, such may not be true. Not if we show great determination and preparation. Not if we face the Mullahs fully cocked and steadfast in defeating their violence. And certainly not if we calculate a defeat into our equation as part of our risk analysis. Our democracy gets stronger when we are able and willing to defend it from bullying. Be it Russian or Iranian.

It starts by preparing the American people, which might just convince the Mullahs to stand down. Or otherwise face the mighty U.S. in Tehran itself.

Along such preparations, the United States must permit any of its allies, preferably Saudi Arabia, to plant and detonate a large bomb in Tehran. At night with no collateral casualties and as a warning sign of things to come. The Ahwazis in western Iran are more than willing to carry out such attack.

STOP IRAN FROM DICTATING THE HOW, THE WHEN, AND THE WHO

We must stop Iran from dictating its violence against others freely. Furthermore, we must introduce a new equation that might turn Iranian calculations and risk-taking upside down. If you let a bully attack you again and again with no retaliation, they will continue attacking. Punch them in the nose once and then watch, delightfully, the change of heart.

It is time to strike the Mullahs in Tehran to stop Iranian violence. With rising tides against their rule at home and abroad, a Tehran nose punch might just do the trick to bring down these barbaric rulers.

One U.S. military commander talking of escalation against the backdrop of a non-interventionist commander-in-chief is quite lame. And unfortunately, our President is not smart enough to understand the nuances of a full military and political campaign against Iran. Neither is he brave enough to start it. This is where people of influence can help him overcome his fears. They can help him plan a methodical and precise campaign to stop Iranian violence and possibly force a regime change.

Sanctions alone will not do the job. It is time to act against the Mullahs in Tehran; and to assert US power in the Middle East.

It is time to strike the Mullahs in Tehran.

Time to Strike the Mullahs in Tehran