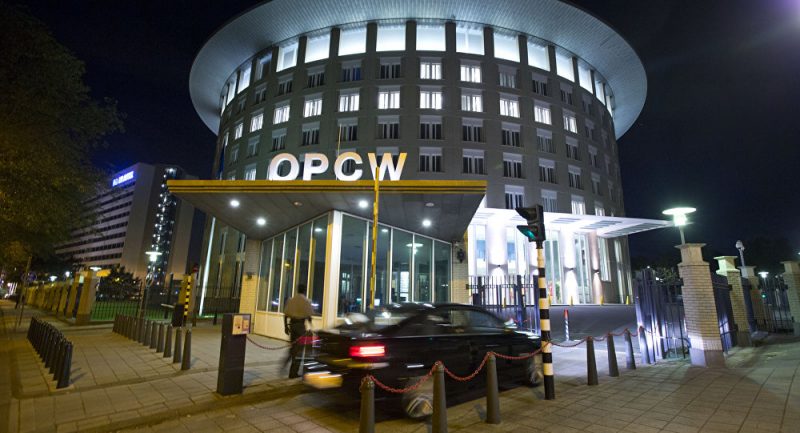 Syrian state television reported that the experts from the Organization for the Prohibition of Chemical Weapons had entered Douma. Western countries say scores of civilians sheltering from bombs were gassed to death there on April 7.

State Department spokeswoman Heather Nauert said on Tuesday said she was aware of reports from Syria that inspectors from the OPCW had been able to see the town but “our understanding is that the team has not entered Douma.” A diplomatic source in The Hague said the experts did not enter Douma.

Meanwhile, France said on Tuesday it was very likely that evidence was disappearing from the location of a suspected poison gas attack in Syria and it called for international inspectors be given full and quick access to the site. Assad blocking Douma OPCW entry while claiming unfettered access.

The French foreign ministry said in a statement:

As of today, Russia and Syria still refuse to give inspectors access to the site of the attack. It is very likely that proof and essential elements are disappearing from this site. It is essential that Syria finally gives full, immediate and unfettered access to all of the OPCW’s demands, whether to visit sites, interview people or consult documents.

U.S. Ambassador Kenneth Ward on Monday said at an OPCW meeting in The Hague that Russia may have tampered with the evidence.

It is our understanding the Russians may have visited the attack site. It is our concern that they may have tampered with it with the intent of thwarting the efforts of the OPCW Fact-Finding Mission to conduct an effective investigation.

Douma is now in the hands of government forces after the last rebels withdrew just hours after U.S., French and British forces fired more than 100 missiles to hit three suspected chemical weapons development or storage sites.

Saturday’s air strikes were the first coordinated Western strikes against Assad’s government in a seven-year war that has killed more than 500,000 people and drawn in global powers and neighboring states.

The intervention threatened to escalate confrontation between the West and Russia but has had no significant impact on the ground, where Baschar al-Assad is now in his strongest position since the war’s early days and shows no sign of slowing down his campaign to crush the rebellion.