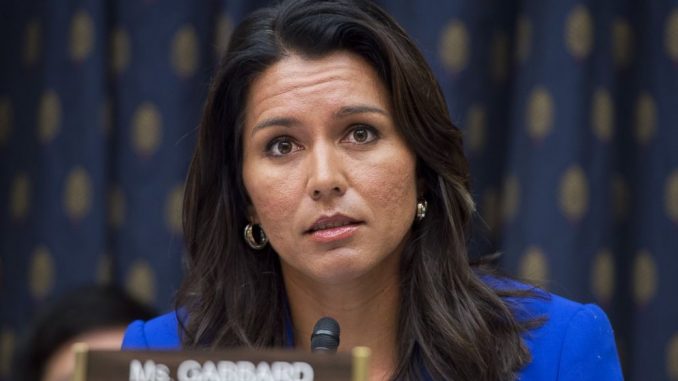 September 22, 2018 2:18 am 0
When a Jew and a Muslim Speak in One Voice, World Better Listen
Defected Syrian official to implicate regime in chemical attack
Falling on Deaf Ears

Nancy Pelosi (D-CA) may have given Gabbard the green light to meet with Assad. Pelosi visited Chemical Assad in 2007 after he has killed, with help from Iran, hundreds of our troops in Iraq.

At the time, The Guardian of London wrote:

Gabbard’s trip raised alarms over a potential violation of the Logan Act, a federal statute barring unauthorized individuals from conferring with a foreign government involved in a dispute with the US.The US currently has no diplomatic relations with Syria.

Did her Party make her pay for it? Not at all. Did the FBI investigate her? Are you kidding!!!

Of course, she claimed she traveled to Syria to pursue peace for the Syrian people. By congregating and agreeing with their mass murderer.

Gabbard is an Agent of Chemical Assad

As if the damage she has done in warming up to a war criminal exterminating his own people is not enough, Tulsi Gabbard has become Chemical Assad de facto agent in Washington D.C. She recently began accusing President Trump and Vice-President Pence of protecting al-Qaeda in Syria. Exactly what Chemical Assad has accused the west when in fact he was the one who boosted al-Qaeda and ISIS in Syria.

Gabbard thinks the American public is stupid; especially the good people of Hawaii. All she has to do is point the finger at an unpopular President among her base supporters and they would believe anything she said. Most don’t know Tulsi Gabbard supports chemical warfare against Syrian women and children. None knows she has become Chemical Assad de facto agent.

Why is Gabbard taking this stand at this time after a short one-tear hiatus? Because she, like Assad, wants the United States to leave Syria for Russia and Iran. She is putting pressure on the administration by using the talking points the regime believes are needed to rally the American people to Chemical Assad’s cause. That’s what agents do.

Do not be surprised if we come to find out that the Assad regime is channeling funds to her via Lebanese-Americans like the Khawam brothers channeled money to Dennis Kucinich. Another gem of a human being who supports Chemical Assad.

Would that prompt an investigation by the Department of Justice? Unlikely.