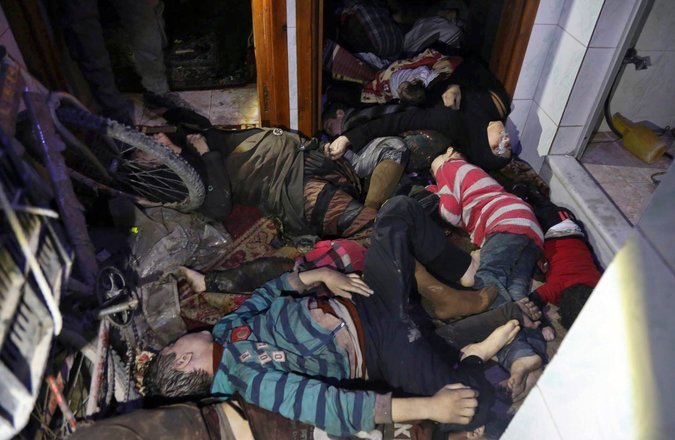 September 13, 2018 6:21 am 0
Trump Promised Forceful Action Against the Assad Regime
#MakeIranGreatAgain. Something Obama Could Not Muster.
Saudi Response to Russian Terror is Slow Coming

The attacks caused injuries in the Damascus suburb of Douma; as well as in Idlib in the northwest in January and early February.

They said they were still investigating a suspected chemical attack in Douma on April 7 that killed at least 49 people and wounded up to 650. On three occasions, the United Nations documented Chemical Assad WMD attacks.

The United Nations has warned of a potential humanitarian catastrophe in Idlib, the last major rebel stronghold, if an expected offensive is carried out by Chemical Assad and his allied Russian forces.

The war crimes investigators said in a statement read out by panel chairman Paulo Pinheiro to a news conference:

The Commission of Inquiry demands that all parties to the conflict and those states who support them do everything in their power to prevent a massacre in Idlib.

They had no information that chemical agents might be used against the 3 million civilians living in Idlib; half of them refugees from elsewhere in Syria. Tens of thousands of rebel fighters control the pocket. They include around 10,000 Islamists designated as terrorists by the world body.

However, the three new cases bring to 33 the number of chemical attacks that the independent panel has documented since 2013 and attributed to the government, a U.N. official said.

John Bolton, U.S. President Donald Trump’s national security adviser, said on Monday that the United States, Britain and France had agreed that another use of chemical weapons by Chemical Assad would result in a “much stronger response” than previous such incidents.

Pinheiro said the latest reports of air strikes on rebel-held areas of Idlib followed a previous pattern. That of “targeting civilian infrastructure and medical facilities”:

“For months we have been saying this concentration of population and armed groups transported or transferred to Idlib was a (time) bomb.”

Assad helicopters dropped Chlorine in Saraqeb in Idlib on Feb. 4. The attack injured at least 11 men, the report said; while the Jan. 22 and Feb. 1 attacks on Douma injured women and children.

“The Commission concludes that, on these two occasions, government forces and/or affiliated militias committed the war crimes of using prohibited weapons and launching indiscriminate attacks in civilian-populated areas in eastern Ghouta,” it said.

The use of chlorine as a weapon is prohibited under the Chemical Weapons Convention.

The U.N. has attributed 33 uses of chlorine to Assad. It has not identified the perpetrators of six more.

On the April 7 attack, the panel said the evidence so far pointed to a gas cylinder dropped by helicopter having struck a residential apartment building.