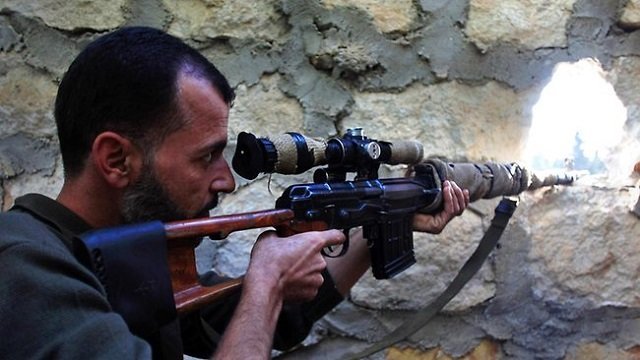 October 17, 2013 5:53 am 0
Arab VP’s: Soon the Most Endangered Species
How Assad Turned His Barrel Bombs into Acts to Defend Christians
The Ideal Syrian Leader

According to the UN, Assad has caused some 6 million Syrians to become refugees or misplaced internally.

Some of these refugees will never return home from Turkey, Jordan, and Lebanon because, in our opinion, Assad wants to tip the balance, population-wise, in favor of the pro-Iran and Hezbollah supporters.

The New York Times has a comprehensive spread on the historic refugee problem the Assad regime has caused.

As part of his ethnic cleansing campaign, reports from Syria are surfacing that pro-Assad snipers, to include Iranian and Hezbollah snipers, are now targeting the uteri of pregnant Syrian mothers.

Not Rwanda or Serbia or Darfur recorded such atrocities; yet, President Obama keeps as far away from the Syrian tragedy hoping to remain blameless for its outcome. In the meantime, Secretary Kerry is chasing a mirage peace conference that would ultimately keep Assad killing pregnant Syrian mothers and their children.

What kind of moral compass the leaders of the free world are motivated by today is expressed amply with their lethargy towards the fate of pregnant Syrian mothers and Syrian children. Negotiating with the terrorists in Iran has priority over stopping the terrorists from slaughtering the innocent and the helpless.

This kind of knowledge by the Arab street will cause infuriating responses to be based on lawlessness, blame, and violent anger (For those who wonder why Muslims blame others, you have an example now). Add as well the fact that these kind of horrific actions by Assad feed into the organic growth of Islamic fundamentalism. It is a war against Sunni Muslims, pure and simple, which will only invite a war against all the Christians and the minorities in the region. Why people ignore this simple deduction is truly amazing.

While many Syrians see this as a war between the Syrian people and Assad, most Syrians will see it as a war between Sunnis and Shias. How does that help bring stability in a world already too unstable? Does the President of the United States believe Iran and Assad will curb their terror in the face of his appeasing gestures?

Again, Mr. Obama has learned nothing from the results of his Cairo speech. Appeasement works when the other side is open-minded and disposed culturally and politically to persuasive and logical arguments. Appeasement is worthless with those who target pregnant Syrian mothers in their uteri.

My guess Islamists will begin to target Alawite and Christian women and children going forward. I think these innocent communities ought to send Assad lots of love and support in return for what he is doing to destroy them. Already the Melkite Orthodox Church in Syria is claiming that some 475,000 Christians out of 1.75m have either become refugees or misplaced internally.

The Sahel region is about one-third the size of Lebanon and ramming some 6 to 7 million Syrians in that space will make Gaza look heavenly unless Assad is able to destroy enough ethnic habitats and cleanse the population.

Does anyone else see what Assad is doing to destroy not only Syria, but also the region and its people, or are we the simpleton flag bearers of Alamo?