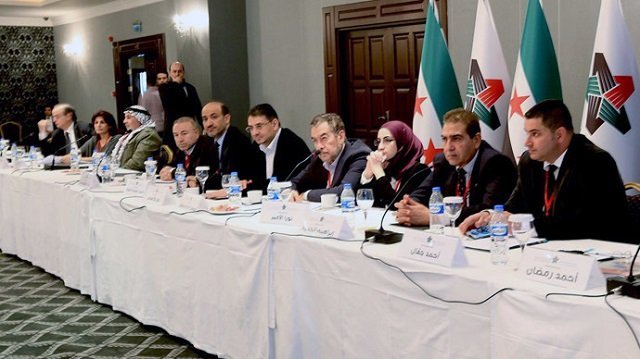 October 18, 2013 9:46 am 0
Of Old Egyptian Men and Older Tyrants
The Quiet Arab Spring No One Hears About
Syria: The Center of the Arab Spring or the Center of a Cold War?

The Obama Administration is pressing for a solution to the Syrian conflict by corralling all the parties involved to attend the Geneva II conference to tentatively be held in November.

Ever since the Assad regime signed off on an agreement to destroy its CW’s stockpiles and capabilities, the regime seems eager to sit with an opposition it can wrap under its blanket to show the world it is seeking peace just before it plants its daggers to finish the opposition off. Geneva II is a trap that would decimate any opposition to Assad.

Why is Mr. Kerry so eager to drive Geneva II? Is this part of a secret deal between the Obama people and Russia in return for Assad to dispose of his CW by forcing a weak opposition into an imposed settlement many know would soon turn into a bloodbath?

In my humble opinion, the US is leading the Syrian opposition as butchers lead the lambs to slaughter. No one knows what is the agenda is and even if known, Assad is not about to sit with an opposition, knowing he is safe from any future US attacks, to hand them bonbons and Baklava. He wants to kill his rivals who have formed a government-in-exile and the US is facilitating that process. Whether intentionally or not matters little. Ignorance and naivetÃ© are not excuses the powerful Office of the President can offer when a policy goes wrong.

It seems to me Geneva II is more about Mr. Obama’s own discomfort of addressing Syria ever again than about those suffering under the Assad regime. This President wants to erase “Syria” from his lexicon and Geneva II is his final solution.

The issue of Assad remaining in power is not on the table in Geneva II, nor is the Obama Administration’s earlier commitments of “Assad must go”, which now have turned to “mass murderers are welcome”.

Every executive decision taken by Mr. Obama, from his early starving the Syrian opposition of weapons to his inaction against a Genocidal maniac are indicative of one thing: Mr. Obama wants Assad in power, and Geneva II is his final act to closing the Syria file by slaughtering diplomatically those Assad could not slaughter on the military field.

That is the Obama legacy on Syria defined by either accommodating Islamists or, when things turn sour, by accommodating mass murderers. This President has surrounded himself with people who either think religion or think tyranny. Freedom using economic equality as a springboard towards self-reliance and independence are too difficult a concept for the lazy bureaucrats in power today.

We will give Arabs and Muslims what they want except those concepts the Arab rulers object to, which is freedom from corruption, cronyism, and total lack of opportunities to be permanently reliant on the Arab ruler for life and the endless pursuit of misery. Everything that is wrong in the region begins with the political structures in place, whether violent or not. Yet, we are turning, once again, to these structures for solutions.

Beware of Arab Spring II. It will begin with civil wars across too many countries simultaneously if we keep our head in the sand by letting economic tyrannies continue through their political counterparts. Â What do you think the Muslim Brotherhood has learned from Egypt and Syria? Has anyone bothered to ask that question before we embark on another U-bad turn?

Arab Spring began as a cry for economic independence from tyranny and Arab Spring II will start again the same way, except this time immolating others, rather than oneself, will be its spark.

When the Useful Idiots Apologize
Once Upon an Arab League
Syria: The Center of the Arab Spring or the Center of a Cold War?
Middle East News 220 Syria News 1210 Syrian Revolution 1352 Tehran John 72