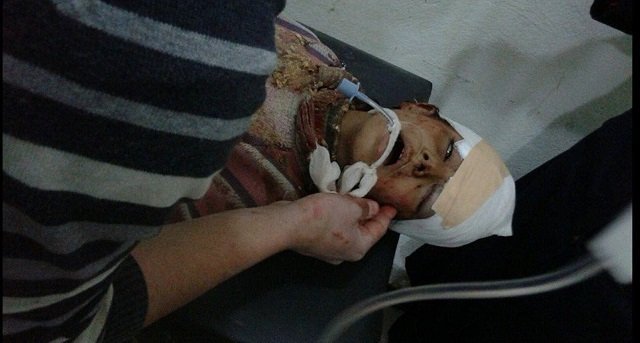 Syrian government forces, backed by Russia’s air force, Iranian troops and Iraqi militias, have continually breached the temporary ceasefire and used barrel bombs and toxic gas, he told reporters on a conference call. Assad massacres civilians in Abu Duhur in spite of the cessation of hostilities.

If Washington does not protest, Assad will see it as a green light to further massacre innocent civilians thus using John Kerry as a Carte Blanche for Russia and the Assad regime to kill at will while forcing the Syrian opposition not to respond.

“Just a few minutes before we came on this conference there was a massacre committed by the air forces of the Russians and the regime in Abu Dhuhour,” opposition coordinator Riad Hijab said on Monday, referring to a settlement in eastern Idlib governorate.

Tens of people had been killed and tens wounded, he said.

Syria’s opposition will decide by the end of the week whether to attend forthcoming peace talks in Geneva and has complained to the United Nations that Russian air strikes have carried on despite a truce, Hijab said.

The opposition High Negotiations Committee (HNC) would consult military commanders and other leaders about whether to attend the talks and participating required a conducive atmosphere, he said.

“It will be before the end of this week, there will be a clear decision about this,” Hijab said through a translator.

Hijab said he had sent a letter to U.N. Secretary General Ban Ki-moon to complain about a map of armed groups’ positions, which was published by the Russian Defence Ministry. Hijab said, however, that the map was not accurate.

“If it is being taken seriously it would represent a clear and flagrant violation of the cessation of hostilities agreement,” he said.

The HNC would send a representative to Geneva in the next few days to give an accurate picture to a ceasefire taskforce hosted by the United Nations and chaired by the United States and Russia, he said.

Russia has said its air strikes are only targeting banned groups that are not part of the ceasefire deal, such as the Nusra Front. Hijab said Nusra’s positions were close to but “not interlinked” with opposition positions.