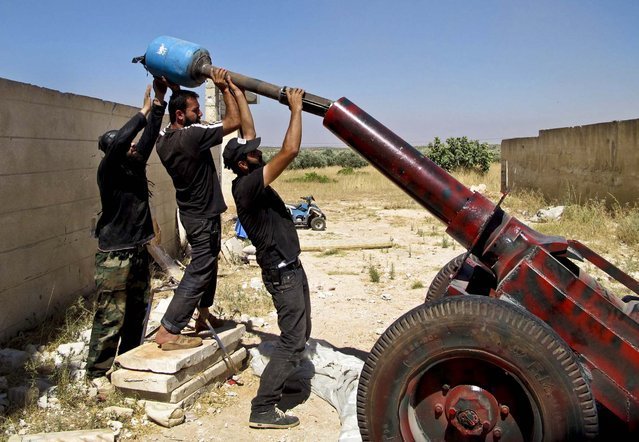 All arrows on Assad

Fox News host Megan Kelly drilled Vice President Cheney on her show by accusing him, indirectly, to be the cause of today?s mess in Iraq.

She followed it by another segment with Ambassador John Bolton and a highly spirited Kelly trying to pin our problems in Iraq on starting the war in 2003.

The message is clear; if it has not been for the US attempt to free the Iraqi people, US troops would have never suffered the consequences and Saddam Hussein would have never permitted Iran, ISIS, or any other group from forcing the US to pay such dear price in lives and treasure.

If anyone doubts Obama is striking back at his critics, think again. Megan Kelly might as well be Nancy Pelosi. This forging of the message between the far left and the right should be of great concern to all Americans.

Attacking Iran directly or indirectly in the media has failed as a strategy. We can all sing Khamenei, Rouhani and Qassimi until we turn blue in the face, this President is not about to quit negotiating with Iran. The more forceful the issue becomes, the more stubbornness we are seeing from this President.

It is high time to reconstruct a more plausible argument that not only pegs this administration against the wall on Syria, but also more importantly reveals the truth about why ISIS is so strong today in the first place. If Assad had not released ISIS fighters from Syrian jails to scare the west into submitting to his will and had he not gassed Syrian women and children, Iraq would not be the mess that it is today.

Furthermore, if al-Maliki had not turned Iraq into a conveyor belt of weapons to arm Assad to kill Syrian women and children, Iraq would not be the cause of such headache for the US today.

What is worse than to collaborate with the Iranian regime in the name of defeating some ragtag Islamist fighters their threat to US interests has yet to turn imminent? Mr. Obama has crippled the rudder of his ship and no amount of direct pressure will convince him to divert away from negotiating with Iran. His Achilles? Heel has been and will always be Syria. Yet, we are all dropping the ball on where it matters the most.

As I have said before, ISIS/ISIL must first defeat the IRGC, Assad, the Mahdi Army, and Hezbollah (All of them staunch US enemies) before these hardcore Islamists can be threatening to our national security interests.

If we do not start singing Assad like a canary sings in springtime, Americans will have to begin considering learning Farsi. When Megan Kelly, a conservative voice on Fox News attacks the era of President George Bush, America is in a heap of trouble.

Newsweek has offered us the ammunition and we should all run with it as if we were on fire.

Attack Assad for freeing ISIS fighters from Syrian jails, and attack him for gassing innocent Syrians, which started the process of galvanizing and metastasizing the extremists into one giant ISIS/ISIL fireball. This argument will weaken Obama naturally when he looks like he was the one to create ISIS/ISIL as much as Assad has.

Otherwise, I suspect we may soon watch Barack Obama and Rush Limbaugh in a joint press conference attacking President Bush.