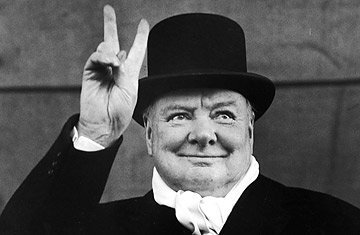 Imagine Hitler instead of Churchill

Through a crafty plan that plays on the fears of a US President unwilling to see the world with all its evil, Obama?s legacy can best be described as ?The perfect Marionette in the hands of America?s enemies?. He played right into Iranian hands on Syria and he is continuing that tradition in Iraq. For Mr. Obama, the meaning of learning from one?s mistake is ungodly because he is THE gift to humanity.

The above is one explanation of who Obama really is. My sense, however, is a bit more sinister. Here is why.

In less than six years, Mr. Obama has succeeded in a switch and bait policy to ultimately bait our traditional allies and switch to collaborating with our enemies. Just imagine for a moment the US collaborating with Hitler against Churchill to get a sense of what this President is doing. Still, many Jews believe he is not anti-Semitic at all. We had those dreamers in Germany too.

Whichever explanation of how accidental or intentional Obama?s policies are, it is quite clear that the 44th President of the United States is transforming America through a policy of empowering her enemies. In his own world, Obama believes that abandoning the region to Iran means it is no longer America?s responsibility and therefore its burden. It also doubles down on his passion to limit Israel?s influence in the region.

For this President to collaborate with her enemies shows the extent of how much reform the political system in America needs. What is the meaning of ?treason? then?

The wake-up call will take place the moment he bombs ISIS/ISIL in Syria and Iraq after ignoring bombing Assad for the atrocities he committed. This is when every Sunni Muslim in the region will back ISIS/ISIL and America will have 350m Arab Sunnis as her enemies, not just the few thousands Jihadists we face today. If we learned anything from Syria is how easy it is to transform a moderate rebel into an extremist when he his choices are either death or fight dying.

According to calculations I made in the Levant region using the CIA Factbook, there are 29,147,497 Sunnis against 24,125,134Shia. If not the whole Arab world, at least 30m Sunnis directly affected.