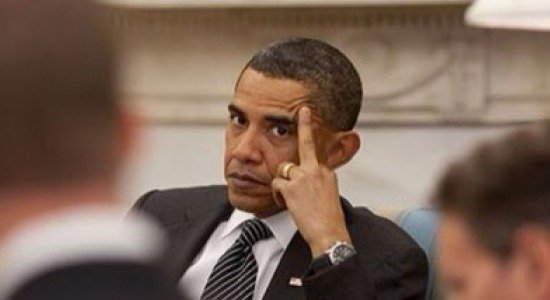 Obama is losing it

August 12, 2014 4:16 pm 0
For Heaven’s Sake, We Are the United States of America
Jewish Children Risking Massacres
Saudi Arabia is right

We learned from Josh Rogin at the Daily Beast that President Obama called the criticism bi-partisan lawmakers leveled at his Syrian foreign policy horseshit. It happened when the President invited the lawmakers to the White House to discuss his foreign policy.

Obama did not expect that kind of criticism, which seemed to have jarred him loose. Using foul language against our own lawmakers is indicative of a President losing it. Part of me wished he would be so strong against Khamenei and Putin, not our own legislators.

Hillary Clinton also attacked Obama in an interview with the Atlantic. Her attacks have ignited some to write about Obama?s failed policy on Syria from a new and fresh perspective. I expect many more will in the future to help Clinton distance herself from Obama, which is prompting some of Obama?s far left supporters to call her a neocon.

That war has just started between the two camps. Clinton did not select Syria by accident. It is by far Obama?s Achilles Heel because the results today are forcing him to react when all he wanted was to forget Syria it ever existed.

When Bush was criticized for the Iraq War, he took it like a man. Obama is too much of a crybaby to expect anything better from him or his entourage.