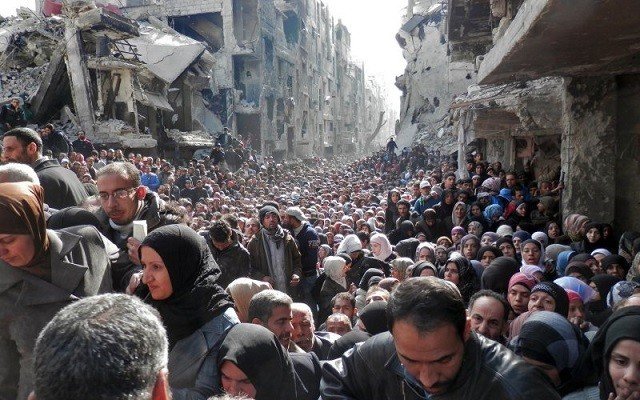 How much the world hates Obama

The city of Aleppo is under siege and it is expected that the Assad regime will starve about 300,000 civilians caught inside the city.

This is not the first time Assad has starved women and children (Then sent his snipers and those of IRGC to target the uteri of pregnant women foraging for food for their young children). Assad exercised the same terror against Homs and the suburbs of Damascus.

While Assad starves civilians, Obama watches without lifting a finger. How do people like Obama live with themselves knowing they could have saved hundreds of thousands of lives and stem the flow of millions of refugees, yet sat on the sideline without any care in the world. Helping Syrian civilians is not a national security issue, it is a choice Obama made because he wants to please Khamenei.

We are making a big mistake abandoning the region to the terror of Russia and Iran. It will come back to bite us big time because we do not think 350 million Sunni Arabs are about to forgive Assad for his crimes, or forget the lack of empathy Obama has shown towards the genocide of civilians under his watch.

Goodness gracious is this what it means to win the Nobel Peace Prize? Protect terrorists from prosecution for their war crimes while watching civilians die in the thousands?

In short, Obama has a de facto alliance with Assad when both air forces strike positions in Syria not far from each other. Our president is bedding mass murderers, killers, and terrorists. Of course, everyone will deny his actions in Washington.

This president is going to watch in slow motion, after he leaves office, how much the world hates Obama. In many countries around the world, he has been either missing, deceitful, or plain arrogant in dealing with America’s allies. This kind of narcissistic behavior will not go unnoticed once he leaves office. “Good Riddance” will be the most googled two words in search of thousands of Bloggers bidding Obama goodbye.

Do you want to know what I think? Those leaking sensitive information about the unlawful secrets and scandals of Obama are lining up outside the house of Bob Woodward as if to buy an iPhone 6 the day it sells. The books that will come out after 2017 are not going to be kind to Obama.

This president is going to learn what it means to be hated so much by so many people around the world. How much the world hates Obama.

How much the world hates Obama? Ask the Syrians, the Ukrainians, the Saudis, the Turks, the Yemenis, the Nigerians, the Israelis, the French, the Germans, the Italians, and every country in-between. Ask the people of Poland, the Czech Republic, Hungary, and even Russia that Obama kowtowed to. However, do not ask the terrorists because it will skew the results.

I am expressing deep emotions in this Blog because Aleppo is the city where I was born and raised, and I have every right to express them. To me, there is no difference between Assad and Obama when one kills and the other watches when he can do much to stop the killing. Absolutely no difference.

How much the world hates Obama