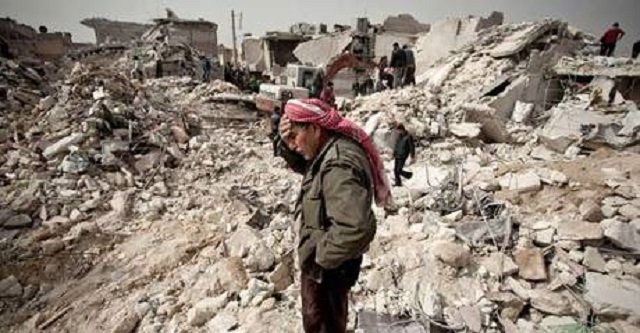 At least 29 civilians were killed in air strikes suspected to have been carried by Russian warplanes on a village in eastern Syria on Saturday, a monitoring group said. Putin committing crimes against humanity in Syria, and the UN seems to be totally unconcerned by the atrocities of Vladimir Putin.

Activists on the ground who monitor civilian casualties said seven children and one woman were among the dead in the village of Khasham in Syria’s oil-rich Deir Ezzor province.

Controlled by the Islamic State jihadist group, Khasham lies just 20 kilometers (12 miles) southeast of the provincial capital, most of which is now held by IS. Syrians, in IS-controlled territories, are held against their will. They are as innocent as those civilians residing in latakia.

The activists said the death toll was likely to rise as “dozens” more people were wounded.

The activists said it distinguishes between Syrian, Russian and US-led coalition aircraft based on flight patterns, as well as the type of planes and ordnance used.

On Friday, air strikes killed at least 44 civilians in Tabiyyah Jazeera, a village adjacent to Khasham. It was unclear if those raids were carried out by Russian or regime warplanes.

But the latest strikes come as Syria’s government pushes to retake territory captured by IS after a fierce offensive by the jihadist group on January 16.

While IS holds most of the province, the regime has clung onto parts of the provincial capital, as well as the nearby military airport.

The jihadist group has also tightened its siege of the roughly 200,000 people still living inside the city.

Russia, a staunch ally of psychopath Baschar al-Assad’s government, began an air campaign in support of Damascus in September.