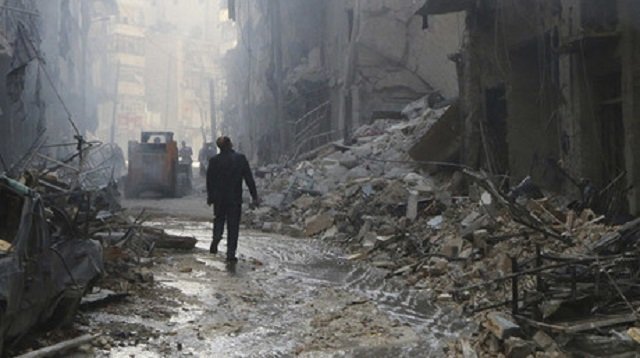 Russian Syrian Campaign Is to Commit Crimes Against Humanity, Not Defeat ISIS

Russia on Friday curtly rejected Western accusations that it had sabotaged Syria peace talks in Geneva, and said it had some “new ideas” on how to move the stalled negotiations forward. The Russian Syrian campaign is to commit crimes against humanity just like Assad has, not to defeat ISIS as Putin claimed. Every Western leader who trusted Putin looks like a fool today.

Western countries renewed their charges that Moscow torpedoed the talks by using its air power to back a Syrian government offensive in Aleppo while the sides were gathered in Geneva.

A diplomat said the United States, France and Russia had “animated exchanges” on the topic at a closed door meeting of the U.N. Security Council on Syria.

Russian ambassador Vitaly Churkin brushed off the accusations before the meeting began.

“It’s in bad taste. This is not a good time for recriminations,” he told reporters.

Afterward, Churkin said his government had ideas on how to move things forward at the next international meeting on Syria in Munich later this month, “especially as far as a ceasefire is concerned.”

“We are going to bring some new ideas to the table and we hope other members of the international support group are going to shoulder their responsibilities,” he said.

In the past, every time the Russians were cornered, they always came up with new ideas to divert attention away from the present situation. The Russian Syrian campaign is to commit crimes against humanity just like Assad has, not to defeat ISIS as Putin claimed.

U.N. special envoy Staffan de Mistura briefed the council on his decision to suspend the Geneva negotiations until February 25.

In an interview with the Italian daily La Repubblica, de Mistura said the Munich meeting will test the will to reach peace in Syria among the main countries involved.

“One cannot expect the opposition to negotiate with a gun to their heads.”

Paris remains committed to a “credible negotiation” but “the negotiations cannot be a smoke screen allowing the regime to continue quietly its massacres,” Delattre said.

British ambassador Matthew Rycroft also criticized the Russian military campaign, blaming it for the breakdown in the talks.

“He needs to look in the mirror and understand where the responsibility lies,” he said of Churkin. “The opposition needs to see that we mean it when we say we want to build their confidence.”

Using an Arabic acronym for the Islamic State group, an extremist movement that is fighting the Syrian regime but which is opposed by the West, Ryrcroft said:

“Russians need to do what they said in the first place: to be in Syria to fight Daesh. If they did that, yes, we would be cooperating very effectively.”

Asked about the chances of the Geneva talks resuming soon, he said, “A lot depends on the confidence building measures, we need as strong a package as possible of measures that will help rebuild the faith of the Syrian opposition.”

“At the very least, it is going to involve opening up humanitarian access and an end to indiscriminate aerial bombardments,” he said.

The Syrian opposition has insisted on those two points, as well as the freeing of prisoners, as conditions for its participation in the Geneva talks.

He added that sieges had been lifted on certain Syrian communities in recent days. He forgot to mention that those sieges were not sprung by Assad but ISIS. Assad is besieging every community he could in this war.

Diplomats said that in the closed door consultations de Mistura had noted that it was evident to everyone in Geneva “that violence on the ground was increasing while we were conducting the talks.”

“The Syrian people need to feel that this time there is really an improvement on the ground,” diplomats quoted him as saying.

Meanwhile, America, the only country that stood in the past by the side of the weak and the helpless, is absent totally from the scene. Its incompetent and heartless president is napping somewhere under a tree.

If Obama did not want the Russian Syrian campaign, and in particular Vladimir Putin, to commit crimes against humanity, he would have imposed more sanctions on Russia the way he did when Putin invaded the Ukraine.  Our president could care less about women and children starving to death by the millions.

Russian Syrian Campaign Is to Commit Crimes Against Humanity, Not Defeat ISIS