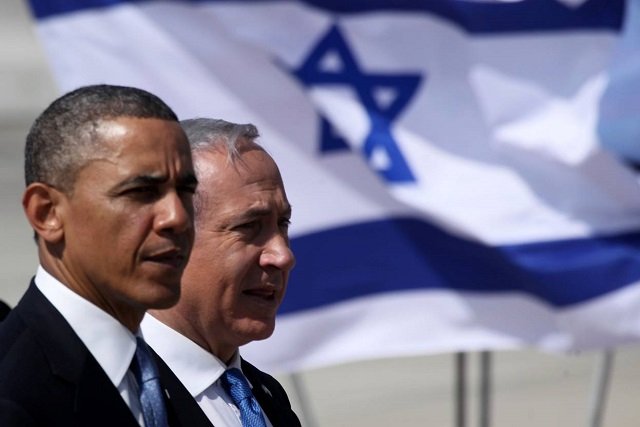 Everything Obama Does Points to One Obsession: Destroy Israel

January 23, 2016 11:09 pm 0
Netanyahu: Israel will hit hard if Syrian threat detected
Is Al-Waleed bin Talal Visiting Israel or Not?
Too Little, Too Late, Too Insulting

In Syria, Barack Obama is battling ISIS and Vladimir Putin is battling Assad’s opposition. Between them both, the psychopath Baschar al-Assad is secure, which fits perfectly with Obama’s policy of rapprochement with the terrorists in Tehran and distancing America from its traditional allies in Saudi Arabia and Israel. Everything Obama does points to one obsession: Destroy Israel.

No other US President would have capitulated to Russia by permitting Putin to build two air bases in Syria with a third one on its way. Unless that president has decided to empower Russia and Iran at the expense of America’s allies regardless of the consequences, and unless that president harbors a long-term goal of unleashing Israel’s most potent enemies upon the small Jewish State.

Permitting the Muslim Brotherhood to ascend to power in Egypt did not play out exactly the way Barack Obama planned it. The MB has demonstrated its incompetence at governance and by extension its incapacity to become a lethal danger against Israel. But the Iranians, Obama calculated, are cunning and capable. Releasing the Mullahs to create havoc in the region will eventually reach and destroy Israel.

Baschar al-Assad is an enemy of Israel even though he has the capacity to convince many dumb Israeli politicians of his minority status to confuse them. He plays the Islamist card to maximize that confusion, and many fall for it head first. Many Israelis forgot that he was the one to release these Islamists in the wild in the first place. As an enemy of Israel, Barack Obama has chosen to protect Assad.

Hezbollah is an enemy of Israel, which is on the verge of installing its own really stupid puppet named Michel Aoun as president of Lebanon. Do you see Barack Obama objecting to Aoun’s candidacy or the US State Department voicing any concerns? Complete and utter silence play into the long-term goal of Barack Obama, which is his obsession at creating the good conditions necessary to destroy the Jewish State.

To hide his obsession, Barack Obama will take baby steps to show he is a friend of Israel knowing well these steps will play no role in protecting the Jewish State in times of need. For example, he will help the Kurds in northern Syria, which Israel see as allies. But when Iran points 100,000 missiles at Israel from Syria and Lebanon what can the Kurds do?

He will combat ISIS to show he is playing along in protecting US allies, but he knows well that as long as Assad is in power, the radical Islamists will continue to grow and metastasize into different factions, groups, and organizations. If not Jabhat al-Nusra, it is ISIS; if not ISIS, it is some other new organization. His own UN Ambassador Samantha Power confirmed this truth publicly.

While Obama conspires to harm Israel, innocent civilians, in the hundreds of thousands, are dying, starving, and getting tortured in Syria, Iran, and even Russia. While Obama’s obsession to destroy Israel plays out, millions of refugees are flooding Arab countries and Europe.

One little man who distributed leaflets, as compared to another little man who failed as an artist, both have been obsessed with destroying the Jews. The painter almost succeeded during WWII and the leaflet distributor thinks hiding his obsession while empowering terrorists by proxy is the way to succeed.

Everything Obama Does Points to One Obsession: Destroy Israel

Israel is the Litmus Test Between Muslims and Crude Muslims
Why I Admire Israel
After Iran, Assad Number is Up
Opinions 1006 Slippery Barack Obama 973 Support U.S. Allies 152 Weak Barack Obama 235