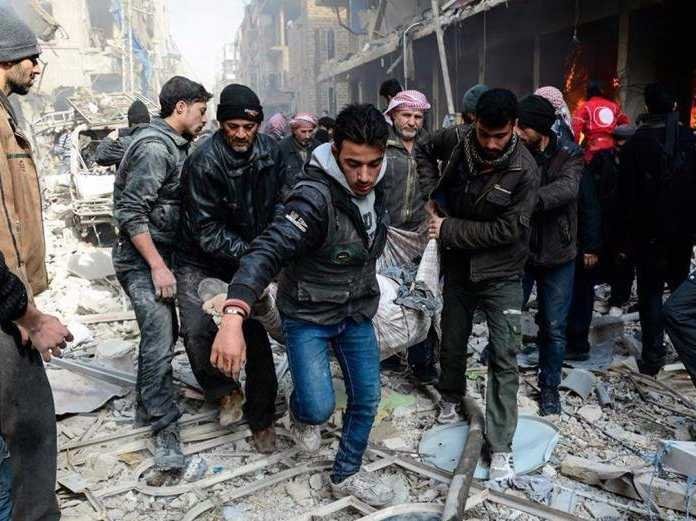 May 4, 2015 11:44 am 0
Is Obama getting permission from Iran to strike ISIL?
Kerry’s New Job as Spokesman for the Kremlin
Celebrating America the Ungrateful Couple is Transforming

FOR TWO years, the regime of Bashar al-Assad has appeared to have the upper hand in Syria’s grinding civil war, thanks to the heavy intervention of Iranian-sponsored militias and criminal tactics such as the dropping on civilian neighborhoods of “barrel bombs” filled with shrapnel or chlorine gas. Now the tide may be turning back against the dictator. In the last several weeks rebel forces have made significant gains in both the north and south of the country, capturing a provincial capital as well as the last government-held border crossing with Jordan. As The Post’s Liz Sly reported, there are signs of serious dissension within the Assad inner circle, even as a new rebel coalition shows surprising cohesion.

The shift of momentum could create an opportunity for the United States and its allies to leverage the change of rulers in Syria that President Obama first endorsed nearly four years ago. But it could also lead to disaster, if the crumbling regime is replaced by the jihadist forces of the Islamic State or al-Qaeda, as already occurred in eastern Syria. In short, the battlefield developments add new urgency to the need for a coherent U.S. strategy.

The Obama administration has not even pretended to have a Syria policy since the collapse of its efforts to broker peace talks more than a year ago. Though it is sponsoring military training for a few thousand Syrians, the Pentagon won’t commit to defending them if they are attacked by the Assad forces. Mr. Obama continues to turn aside proposals for a safe zone in northern Syria where moderate political forces could organize; he ignores the Assad regime’s renewed usage of chemical weapons such as chlorine gas.

One consequence of this fecklessness has been the defection of Syrian fighters to jihadist groups such as Jabhat al-Nusra, which is affiliated with al-Qaeda. Another has been the apparent decision by Saudi Arabia’s new leadership to join with Turkey in providing new support to rebel groups, rather than continuing to wait for U.S. leadership. The rebel advances in northern Syria have been made by a coalition including Jabhat al-Nusra and more moderate factions. Though the Islamists say they will not impose their rule on the captured provincial capital, Idlib, they offer a unpalatable political alternative for the majority of Syrians and for the West.

Many military experts don’t think the Assad regime is near collapse, though such wartime judgments are necessarily uncertain. Yet it’s clear that a moderate and credible alternative is desperately needed. One big reason previous U.S. efforts to foster one have failed is that it has been impossible for civilian opposition leaders to base themselves and organize inside the country. That’s why a U.S.-backed safe zone, along with an expanded military training program, is needed: not to intervene in the civil war but to make an acceptable solution to it possible. A continued refusal by Mr. Obama to act will only increase the chance that as the Assad regime loses ground, that held by terrorists will expand.

Obama’s Biggest Lie Awaits the GCC Leaders
Assad on the back foot
Did the U.S. Just Kill 5 Kids in Syria?
Slippery Barack Obama 967