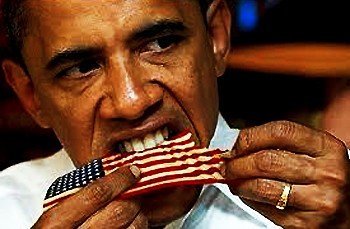 Why Obama is ISIL dream recruiter

Ever since the air campaign against ISIL in Syria and Iraq, I warned in several Blogs that unless the US also attacks Assad or at least provides protection to the civilians Assad is massacring while Obama ignores the suffering of the Syrian people, ISIL will get fresh recruits of Sunnis to join. I also predicted that if ISIL were to be defeated, it would go underground and gain even more sympathy and support from Sunnis in the Arab countries.

Today, I would like to report officially that Obama is ISIL dream recruiter. Not even Assad massacring children and women is leading Syrians, Arabs, and Muslims to flock to ISIL like Obama’s actions, or lack of.

Between the months of December 2013 and October 2014, the Washington Post reported 214 Germans joined ISIL. One month later, new fresh data from Germany pegs the number at 550. In one month, if both data sets are accurate, there has been a jump of 336 more fighters from Germany to fight for ISIL. This represents a 157% increase.

“Isis now is like a magnet that attracts large numbers of Muslims,” said Abu Talha, who defected from the FSA a few months ago and is now in negotiations with other fighters from groups such as the al-Nusra Front to follow suit.

And here is another one from the same article.

A third man, Abu Zeid, the commander of an FSA brigade near Idlib and a defector from President Bashar al-Assad’s army, said: “All the locals here wonder why the US coalition never came to rescue them from Assad’s machine guns, but run to fight Isis when it took a few pieces of land. We were in a robust fight against Isis for confiscating our liberated areas, but now, if we are not in an alliance, we are in a truce with them.”

Omar Waleed, an FSA fighter in Hama, north of Damascus, said: “I’m really scared that eventually most of the people will join Isis out of their disappointment with the US administration. Just have a look on social media websites, and you can see lots of people and leaders are turning to the side of Isis.

“All those who were cursing and attacking us for joining Isis came to pledge their loyalty to Isis. A couple were FSA commanders, others were members of Islamic brigades. Even ordinary people now demand to be governed by Isis,” Abu Talha said.

While Assad starves cities and towns and Obama refuses to drop supplies in areas ravaged by hunger, ISIL is not sitting around waiting. Here is what it is doing to earn the sympathy of Syrians and all Arabs.

“We opened 57 free public restaurants in Raqqa city, which provide three meals a day for any resident to foil any claim by a looter that he had to steal in order to feed his children. We provide free fuel to residents as well.”

How could the US ask Syrians not to join ISIL? This is why Obama is ISIL dream recruiter.

How much is ISIL growing? Here is a quote, and even if exaggerated, one has to be concerned.

Isis does not have enough weapons for the number of foreign and local jihadis wanting to join its ranks, Abu Talha said. “Jihadis in Algeria, Morocco and Yemen are declaring their allegiance to Isis. Soon we will be in Gaza and then in Iran. People are starting to be aware that Isis is defending the Sunnis.”

Maybe this has always been Barack Obama’s plan, or rather Iran’s plan to peg Sunni Arabs against the US.

Why Obama is ISIL dream recruiter