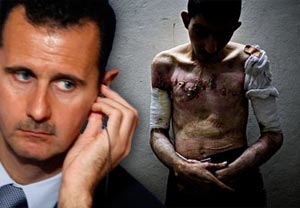 Mr. President, should you not do more to protect the civilians?

Whatever President Obama is smoking, I want some of it too. Whatever he is smoking seems to turn the real into surreal and facts into fantasy. The spinning and the mincing of words do not deflect from the big question here: Is America safer under this President more than it has been under any previous administration?

When Obama abandoned the Free Syrian Army battling the Assad regime, he provided the perfect conditions for the Jihadists to fester and prosper. Today, this has led to US strikes in Iraq and they are about to start in Syria preceded by intelligence gathering Obama ordered over the weekend.

Of course, none of this would have happened had Mr. Obama not been so receptive to aligning US interests with terrorist countries.

Think about it. Obama helped create ISIS/ISIL, with Assad?s assistance, and now he is about to strike ISIS/ISIL with Assad help. Can this statement be any clearer about the relationships and the actions this President has undertaken in support of terror? Whatever Obama is smoking, he needs to stop it.

Terrorists in ISIS/ISIL have come from 50 different countries; I believe this was Assad?s meticulous plan as he fostered their terror (Newsweek here, and US State Department here). Does anyone remember when Assad threatened the world with WWIII? How did Obama miss the opportunity to take down this ultra-terrorist regime, I will never know.

The countries these fighters come from, whether it is the US, Europe, Southeast Asia, or China, they are all preparing for the worst when they go back home. While US intelligence is on top of a small list of names (About 100), other smaller countries with scant resources will be in grave danger of terror.

When bombed in Syria, ISIS/ISIL will go underground. It will not stop the strikes against Assad and the recruiting will escalate in the Gulf countries and North Africa into sleeper cells. It is obvious that Obama is not about to strike Assad, which means he is sending the signal that Sunni civilians in Syria are dispensable and terrorist Shia ruling Iran must be protected. The Assad massacres will go on display forever to recruit for ISIS/ISIL.

Asked if the US was joining forces with Assad, Ben Rhodes, deputy national security adviser, told the New York Times:

?Joining forces with Assad would essentially permanently alienate the Sunni population in both Syria and Iraq, who are necessary to dislodging ISIL?

Mr. Rhodes thinks the Sunnis would not view America bombing ISIS/ISIL, and not bombing Assad for his massacres, as America siding with the murderous Shia regime in Iran against the Sunnis.

He believes Sunnis in Syria and Iraq won?t mind if Mr. Obama circumvents striking Assad. He must be smoking the same thing.

What about the basin of Sunnis, represented by every Arab country, from which ISIS/ISIL will use to recruit? Should we not worry more about those Sunnis? The optics is what matters hereI do not think Mr. Rhodes truly understand the Arab street, or its mind, for he has never lived in any Arab country. Had he done that, he would know that Sunnis would view bombing ISIS in Syria without bombing Assad as a conspiracy to cleanse, ethnically, the Sunnis as Assad is doing in Syria.

Maybe the Obama Administration ought to consult Ambassador Robert Ford who has first-hand experience in Syria before Mr. Obama embarks on this one-sided foolish attempt to strike one terror group while leaving Assad to continue massacring Sunni civilians.

Which brings me to asking the pivotal question here: On what moral ground did Mr. Obama call Mr. Netanyahu to ask him he needs to do more to protect the civilians in Gaza when Mr. Obama has sanctioned the Assad regime to massacre the civilians in Syria?

Thanks to Ben Rhodes and the small group of advisers surrounding Obama, and who truly do not understand the Middle East region, I believe Syria is about to become the graveyard of Obama?s legacy.

When Assad Can’t Kill Them, Lack of Empathy Does
Syria’s Christians Fight Back Against ISIS and Assad
How to Destroy a Synagogue and Claim to Protect it
Assad Genocide 427 Slippery Barack Obama 973