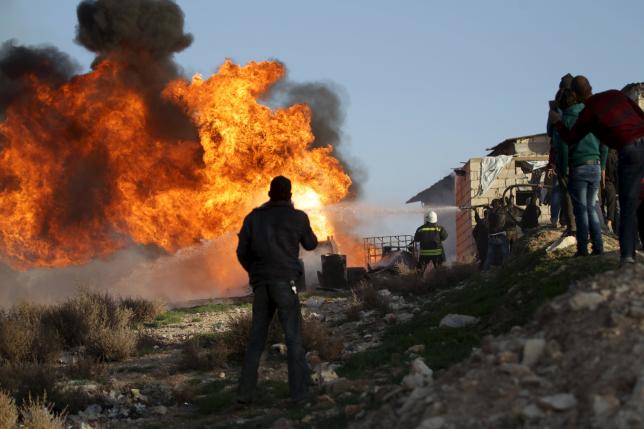 Federal Syria or Not, Assad Has to Account for His Crimes

March 11, 2016 5:15 am 0
So much for Kerry’s agreement to strip Assad of Chemical Weapons
Kurds Have Evidence When ISIS Strikes Assad is Behind it
Bahrainis Deserve Their Freedom

Major powers close to U.N.-brokered peace talks on Syria are discussing the possibility of a federal division of the war-torn country that would maintain its unity as a single state while granting broad autonomy to regional authorities, diplomats said. Federal Syria or not, the psychopath Assad has to account for his crimes.

Assad has forfeited the right to be a Syrian the day he began killing his own people. Syrians will never accept Assad except at The Hague. Never again will he be allowed to rule Syrians.

The resumption of Geneva peace talks is coinciding with the fifth anniversary of a conflict that began with protests against the psychopath Baschar al-Assad before descending into a multi-sided civil war that has drawn in foreign governments and allowed the growth of Islamic State militants in Syria and Iraq.

Fighting in Syria has slowed considerably since a fragile “cessation of hostilities agreement” brokered by the United States and Russia came into force almost two weeks ago. But an actual peace deal and proper ceasefire remain elusive.

As the United Nations’ peace mediator Staffan de Mistura prepares to meet with delegations from the Syrian government and opposition, one of the ideas receiving serious attention at the moment is a possible federal division of Syria.

Neither the opposition nor government has confirmed its participation in the latest round of peace talks in Switzerland.

Speaking on condition of anonymity, a U.N. Security Council diplomat said some major Western powers, not only Russia, have also been considering the possibility of a federal structure for Syria and have passed on ideas to de Mistura.

“While insisting on retaining the territorial integrity of Syria, so continuing to keep it as a single country, of course there are all sorts of different models of a federal structure that would, in some models, have a very, very loose center and a lot of autonomy for different regions,” the diplomat said.

He offered no details about the models of a federal division of authority that could be applied to Syria. Another council diplomat confirmed the remarks.

Federal Syria or Not, Assad Has to Account for His Crimes