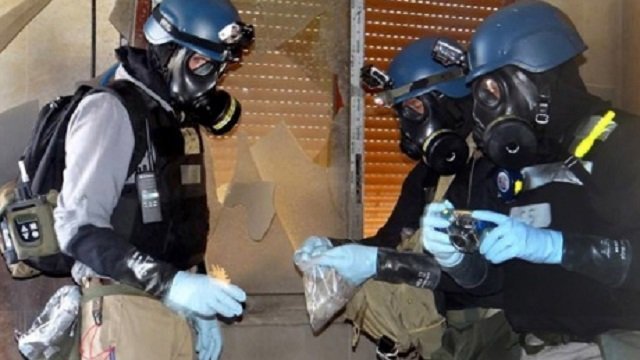 Below is a letter Syrian activists addressed the U.N. envoy to Syria in which they ask him to rescind the U.N. Security Council Resolution banning chemical weapons in Syria in favor of one banning barrel bombs. The activists sum up their logic by claiming it is far easier to die when attacked by sarin gas than barrel bombs.

The letter of the Syrian activists is intended to be satirical. It sheds a spotlight on the horrific destruction to life and material the barrel bombs Assad drops against civilians. The Syrian activists claim it is far easier to bury someone whole who died from sarin gas than pick-up pieces of their body from different corners to try and make sense who is whom and what body part, including open intestine, goes to which dead civilian who perished from an Assad barrel bomb attack.

As of 7 Billion plus people on this planet, Syria is proof that humans have become the most expandable commodity when a feud between countries erupts. The world has watched the Syrian people die in more ways than any of our past history as human beings, yet it stood watching over the mayhem, and some even encouraged the Assad regime killing machine.

The next big money-making enterprise will be the one that successfully converts human genome to an animal genome because animals, in Western civilization, are better treated than humans of another civilization. Imagine how easy it would be to welcome thousands of lost puppies coming from Syria on rafts as compared to thousands of Syrian refugees.

Here is an excerpt of the loosely translated letter the Syrian activists wrote.

We, Syrian activists, residing in Syria and the Diaspora, would like to propose a political initiative that could be the gateway for an end to the Syrian crisis, which undoubtedly has haunted your conscience and the conscience of the civilized world for over four and a half years.

Our simple and realistic initiative can be summed up in one phrase: Sarin gas for barrel bombs. What we hope, Mr. international envoy, is that you work diligently about rescinding the U.N. Security Council Resolution banning the chemical weapons from the Syrian regime, headed by Mr. Baschar al-Assad, and the use of these weapons of mass destruction exclusively against the rebels opposing his rule in favor of blocking him from the use of barrel bombs.

As you know, politicians in the U.S. and Russia agreed in September of 2013 that Mr. Baschar al-Assad should deliver his arsenal of chemical weapons in exchange not to be subjected to punishment for its use and which, at the time, was in violation of a US drawn red line. You also know that Assad had used these weapons to kill 1,500 civilians on August 21, 2013.

Since the US-Russian agreement, Assad has expanded the use of barrel bombs in lieu of chemical weapons to maximize death among the civilian population and to destroy whole towns, villages, and neighborhoods. Every week at least 100 civilians die because of the Assad barrel bombs. Based on that two-year experience with barrel bombs, we believe the removal of the chemical weapons out of the hands of Assad was a big mistake. We would rather die by Sarin gas than barrel bombs.

The letter goes on to describe the horrific death barrel bombs cause. In details, it characterizes the scenes of a barrel bomb attack, which is a mixture of blood, flesh, concrete, steel, dirt, and bones. Death by gas, on the other hand, the Syrian activists assert, is merciful because the body remains intact and their loved ones are able to bury them whole.

The world is ignoring the unabated terror of Assad by focusing the light on ISIS and now on the Syrian refugee problem. Both of which are caused by Assad.

Unless we eradicate the root cause of the problem, which seems to be ignored deliberately by the international community, the ravaging war will continue and the miseries of the Syrian people will be an ornament of shame in each Western leader’s future library.

Syria is your ornament of Shame Barack Obama.