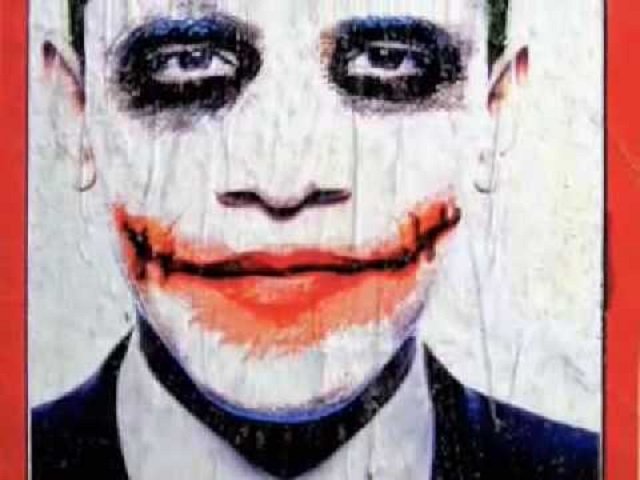 September 20, 2015 1:43 pm 0
A wave turns into a tsunami of terror
Obama and Iran: An Angry Nation and an Angry Abandoned President
Everything Obama Does Points to One Obsession: Destroy Israel

TFS Note: This article shows the extent of Obama’s moral depravity. Not only he made a mess of Syria, but he has the audacity to begin a campaign to blame his critics for his mess. What a joke this president is! Incidentally, we do not agree with others about splitting Syria. It’s already split and terror continues unabated.

Source: The Washington Post – by Jennifer Rubin (Obama claims his critics forced him to make a mess of Syria)

The administration let it be known it is scrapping what it never seriously pursued, namely training of anti-regime, nonjihadist rebels. In what surely is the most cringe-worthy excuse offered by a commander-in-chief, President Obama last week complained that his critics — whom he routinely ignored and scorned — forced him to make a mess of Syria. To say it is unbecoming of a president to whine that he was only following what critics told him to do, understates just how dishonest the president is and how morally repugnant is his approach to a war that has claimed more than 200,000 lives, created millions of refugees and provided the Islamic State with a base of operations.

The New York Times reported, “Mr. Obama is arguing that he reluctantly went along with those who said it was the way to combat the Islamic State, but that he never wanted to do it and has now has been vindicated in his original judgment. The I-told-you-so argument, of course, assumes that the idea of training rebels itself was flawed and not that it was started too late and executed ineffectively, as critics maintain.” (Indeed editorial pages    consistently criticized the president for belatedly, ineffectually, and halfheartedly acting or for shedding crocodile tears but taking no meaningful action to protect civilians, aid nonjihadi rebels and enforce the red line.

Over the past 4 1/2 years the president has rebuffed and/or mocked calls for effective action in Syria from former secretary of state Hillary Clinton, former defense secretary Leon Panetta, Congress and a slew of policy wonks. He cannot blame George W. Bush for this one so instead he blames his critics.

For example, in August 2013, 75 former government officials and advisers wrote to the president:

We urge you to respond decisively by imposing meaningful consequences on the Assad regime.  At a minimum, the United States, along with willing allies and partners, should use standoff weapons and airpower to target the Syrian dictatorship’s military units that were involved in the recent large-scale use of chemical weapons.  It should also provide vetted moderate elements of Syria’s armed opposition with the military support required to identify and strike regime units armed with chemical weapons.

Moreover, the United States and other willing nations should consider direct military strikes against the pillars of the Assad regime.  The objectives should be not only to ensure that Assad’s chemical weapons no longer threaten America, our allies in the region or the Syrian people, but also to deter or destroy the Assad regime’s airpower and other conventional military means of committing atrocities against civilian non-combatants.  At the same time, the United States should accelerate efforts to vet, train, and arm moderate elements of Syria’s armed opposition, with the goal of empowering them to prevail against both the Assad regime and the growing presence of Al Qaeda-affiliated and other extremist rebel factions in the country.

The president refused. Just as critics predict, the slaughter continued, refugees increased, chemical weapons were used repeatedly and the Syrian Free Army withered away from neglect. He now accedes to Russian military action in Syria, a break from decades of bipartisan efforts to keep them out.

One of his persistent critics, former deputy national security adviser Elliott Abrams observes, “Instead of resisting or leading, instead of making the Russians pay a price, we will now have a dialogue with the Russian army. The Obama program for aiding the rebels has become a laughingstock across the globe (unless you are a Syrian, in which case you may cry as you read about it in your refugee camp). . . . The events in Syria will be an indelible stain on the Obama record. This is the president who went to the Holocaust Museum to proclaim proudly his establishment of an ‘Atrocities Prevention Board’ — and now sits passively watching the greatest atrocity and the greatest humanitarian disaster in decades. From the strategic and ‘realpolitik’ points of view, this week is another low point for the United States.”

Former state department official Eliot Cohen concurs there are no good choices now. He notes, “Unfortunately, the administration’s appalling mishandling of Syria has eliminated most of the reasonable options — the people we could have usefully allied with are dispersed, demoralized or dead.” Is there anything to be done? Cohen argues that “most of our effort has to be towards splitting the Iranians, Hezbollah, Syrian regime sympathizers such as the Christians there, who are scared of the jihadis, Russians, and leaning on the Turks, who think that we should do their fighting for them. Instead, I’d probably concentrate on bolstering the Kurds and the Druze in Syria (which will not be a country again in my lifetime), the Jordanians, and the Israelis.” He continues, “We also need to begin pounding into the Europeans the notion that these are now their problems too, because the refugees are coming to them. Finally, we should be publicizing more what the Iranians have been doing, including their and Hezbollah casualties.”

There is little disagreement about the scope of the problem. “It is almost impossible to make recommendations, given where this administrations is,” Abrams tells me. “But we should have [military to military] consultations with Israel and Jordan and Turkey, not Russia. We should devise a serious plan to help the non-jihadi Syrian Rebels. We should warn the Russians that their people are at risk and we will not urge rebels to avoid them if they are defending the regime. We should realize that IS cannot be defeated while Assad remains in power and slaughtering his own citizens. We should realize that Iran and Russia do not have common interests with us, because they wish to keep Assad in place.”

Danielle Pletka (who co-authored a column in 2013 with Gen. (Ret.) Jack Keene criticizing the administration and laying out alternatives) is likewise blunt. “The Syria situation is a nightmare. There’s no quick fix-it, which is what the administration is always looking for.” She nevertheless stands by her recommendations to take out air fields and end Iranian and Russian resupply, create a no-fly zone and then enforce it. She slaps the administration for its failure to “train and equip more than 4 people” in the non-jihadi opposition.

And if that were not daunting enough, Cohen advises that “things are going to be much, much worse eighteen months from now.  A lot more civilian deaths, more chaos, more refugees, and a much larger Russian presence.” The real “fix” is a new administration and an entirely new foreign policy. The only ray of sunshine is that the entire Obama approach of withdrawal and retrenchment has proven so horrifically flawed and morally bankrupt that there would be few who mourn its demise.

Obama to Release $150 Billion to Iran to Conquer the Region
It’s time for Obama to make a choice: Lead us or resign
How Obama Helped Iran Build Terror Networks in EU and U.S.
Slippery Barack Obama 973