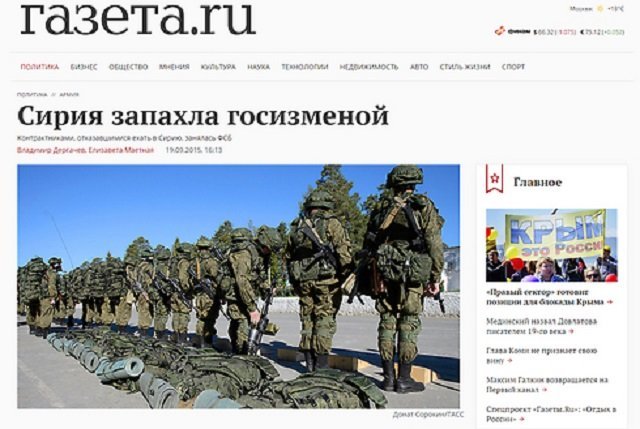 Russian media outlet interviews group of soldiers who refused to be deployed to Syria, describing secretive preparations and their fears: ‘We don’t want to die there.’

As Russian expands its military presence in Syria, a report was published on Saturday in Russian newspaper Gazeta.ru examining the transfer of weapons, equipment, and manpower from the Russian port city of Novorossiysk to Al Assad base in Syria, and quoting several soldiers who expressed their desire to stay away from the war-torn Middle Eastern country.

The paper interviewed a group of soldiers, mainly non commissioned troops, who refused to deploy to Syria due to their fear of ISIS. One of the soldiers, a lieutenant named Alexei, said, “We don’t want to go Syria, we don’t want to die there.”

The group complained that the military had hid their destination from them. They were due to be shipped off on September 17, but 10 days later they were told they would be deployed to a hot region with a very different climate than what they were used to, and that there would be poisonous animals at the new place, but the specific region was not named.

At first, the soldiers assumed they were being sent to eastern Ukraine. But On September 16, the army told them they would be sent to Latakia and that they may have to participate in the fighting alongside Syrian troops.

The paper also interviewed mothers of soldiers who had been sent to Syria, who said that their sons had been sent to fight a war that was not theirs: “People there are driven like cattle to the slaughter.” The soldiers complained that they felt like mercenaries.

Alex Tancher, an expert on Russian media, explained that President Vladimir Putin passed a law in recent months which banned the publication of names of soldiers killed in action. The law was passed as a result of the public outcry caused by the war in Ukraine. The outcry has been renewed by the soldiers who are being sent to Syria.

The Russian Defense Ministry declined to comment on the report.

Prime Minister Benjamin Netanyahu is set to meet with President Putin on Monday in order to discuss the strategic coordination between the two countries in the wake of the Russian buildup.

Chief of Staff Gadi Eizenkott and the head of military intelligence Herzi Halevi will join Netanyahu in Moscow.

Loading...
Newer Post
Syrian Boy And His Dog On The Refugee Trail
Older Post
Obama claims his critics forced him to make a mess of Syria