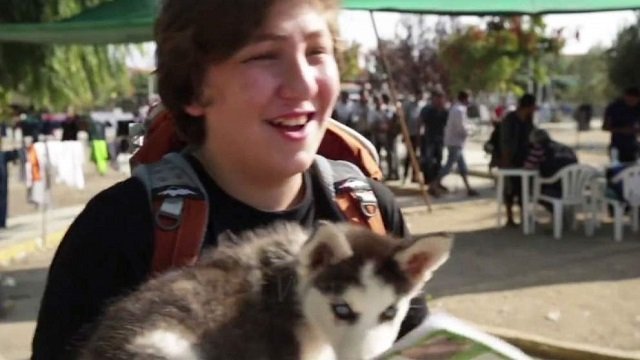 Syrian Boy And His Dog On The Refugee Trail

Source: Sky News (A Syrian Boy And His Dog On The Refugee Trail)

When Syrian teenager Aslan fled war in Syria, he didn’t need to think twice about bringing his beloved pet dog with him.

In footage posted by the UN High Commission for Refugees, the 17-year-old told how he had travelled 500km since leaving Syria’s capital Damascus.

He was told he would not be allowed to take little Rose across the Mediterranean but he wouldn’t take no for an answer and even made the dog her own passport for the journey.

Eventually, Aslan and his dog made it to Greece.

When asked why he had only a small bag for himself and yet was carrying a large pet carrier with the dog inside, he answered: “I love my dog.”

Tens of thousands of migrants have fled conflict in Syria and other Middle East hotspots, resulting in the largest migration Europe has seen since the Second World War.

A Syrian Boy And His Dog On The Refugee Trail