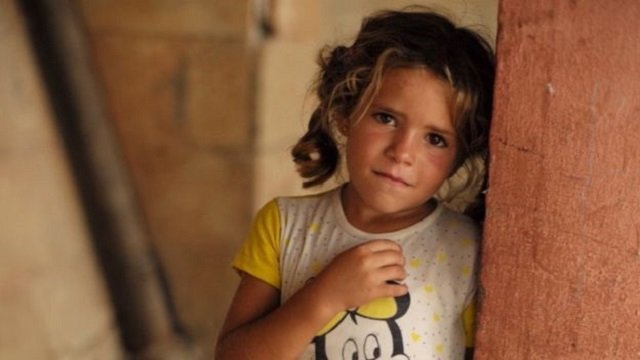 The Syrian Refugee Football Assad is Scoring With

September 16, 2015 2:30 pm 0
Lebanon arresting Syrian moderates
Assad starving Ghouta, after gassing it in 2013
Does Assad Really Think He is Going to Win the War?

Those who do not follow Syria like we do may have forgotten the Assad threats dispensed in early 2011 against the West and particularly Israel. Today’s Syrian refugee football is the result of those threats.

In an interview with the New York Times, Assad’s cousin Rami Makhluf, trustee to the pilfered billions the Assad family has accumulated through extortion and terror, said the following:

“If there is no stability here, there’s no way there will be stability in Israel… No way, and nobody can guarantee what will happen after, God forbid, anything happens to this regime.”

Since Assad has failed to affect the stability of Israel, he has moved against Europe through a systematic ethnic cleansing campaign that has caused the largest migration and displacement of people since WWII. Assad created a Syrian refugee football to kick against the European continent for his own political twisted motives.

The Syrian refugee football is represented by an ethnic campaign that is on-going in Zabadani, Homs (Now partially populated by uneducated Lebanese Hezbollah families), and Hama where Russia just deployed this morning with heavy equipment and troops to finish the job.

Iran’s grand scheme is to cleanse Syria of all Sunnis and pressure Europe, with Putin’s blessing, to accept the Assad regime through a well-planned migration campaign. If Europe submits, it will face yet the largest extortion scheme in its history courtesy of Baschar al-Assad.

Assad’s war against civilians is causing the refugee problem, yet he accused Europe of causing it by supporting the Syrian people he calls “terrorists”. The message is clear. Unless Europe submits to Assad, Khamenei, and Putin, the Syrian refugee football will continue to be kicked.

There has never been a more violent and a more barbaric people in the history of mankind than the Assad family to match the Hitler and the Stalin era; yet, the West failed over and over again to grasp the opportunity to finish with this regime once and for all instead of becoming the target of its barbarism by displacing millions of helpless Syrians.

Barack Obama will never survive this criticism in the future. He will always be remembered as the President that gave terror a boost in the Arab world either through bad deals or through ignoring bad actors that have no right to threaten the Western civilization.

It is truly unbelievable to watch all of Europe with its economic might be rendered into a mouse fleeing its shadows by a farcical dictator like Assad that no one seems to have the courage to depose. Who will depose him now that Russia has planted its claws in Syria’s soil never to leave? Credit John Kerry who believed that diplomacy is the answer with his Geneva I and Geneva II failed conferences.

While Kerry talks diplomacy, Iran and Russia are deploying missiles, tanks, helicopters, fighter jets and refurbishing Syrian military bases to become a permanent threat to the region, and especially our ally Israel. It is almost unreal how Obama is ignoring the threat to America’s interests.

All this while Putin claims his aim is to defeat ISIS, the only terror organization he needs to keep the world under the grip of fear. Putin wants ISIS defeated as much as he wants corruption eradicated in Russia.

When historians look back upon the last five years of the Obama administration, most would point to the missed Syrian opportunity to defeat terror, be it Assad or ISIS. Those who claim Syria would have resembled Libya if Assad were deposed are the most ignorant people bar none. Just compare the demographics of Syria to Libya to realize the folly of this comparison. Under these circumstances, the ignorant could never explain the Sunni support, represented by secularists and liberals, for the Assad regime.

The Assad propaganda has been constantly heaving upon us that all those fighting the regime are Islamists or terrorists. Nothing could be further from the truth. Falling for these Goebbels-like propaganda scams shows a level of sophistication that is truly alarming.

What better way for Assad to get your support than to keep claiming everyone is a terrorist in Syria?

The Syrian Refugee Football Assad is Scoring With