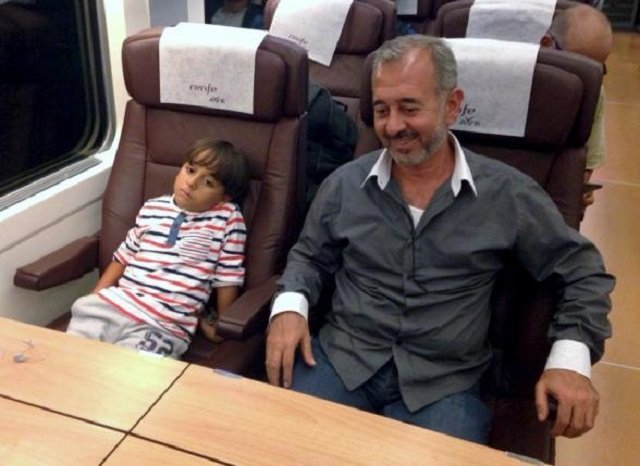 September 17, 2015 4:57 pm 0
Syrian Boy And His Dog On The Refugee Trail
Recognizing a Syrian Refugee Does Not Absolve You Mr. President
Defiling Deliberately the Image of a Syrian Refugee

A Syrian refugee abused by a Hungarian camerawoman Petra Laszlo as he fled police in Hungary with his young son said on Thursday he was hoping to resettle his family in Spain, after a soccer school offered to help find him work.

Videos of the refugee abused and child falling after the journalist stuck out her leg as he ran past went viral on media last week, sparking outrage internationally.

Osama Abdul Mohsen and two of his sons, including seven-year-old Zaid, who was in his arms as he fell, arrived in Madrid in the early hours of Wednesday after a local soccer coaching academy tracked him down and sought to help his family.

“This is a dream come true,” Mohsen told Reuters television on the train from Barcelona to Madrid, the final leg of a rail journey across Europe that took him via Munich and Paris.

Mohsen, who had previously coached Syrian first division team Al-Fotuwa, will be housed in Getafe, a neighborhood on the outskirts of Madrid where the Cenafe soccer school is based.

The academy is helping to pay for his lodging and along with local authorities is working to try and get his wife and the rest of his family, currently in Turkey, to join him.

Mohsen said, speaking in Arabic, as he traveled with Zaid and 18-year-old son Mohammed told Reuters:

“Before working or anything, I want to gather my family, because now we are all spread out and I just want to see us all together again and try to live happily here.”

Tens of thousands of people have been caught up in Europe’s worst migration crisis for decades.

Hundreds of Syrians and other migrants in Turkey are also still trying to reach Europe via Greece before poor winter weather makes the journey even more dangerous.

Mohsen then expressed his views on the Syrian refugee tragedy:

“I hope they (refugees in our situation) find a solution, I have been there and I hope they can find a way out soon. I know what they are going through and it is very, very hard.”

We hope they do too.

The Syrian people have become the victims of the most violent men in the Middle East and the most callous men in the West who abandoned them to the Assad and ISIS terror. Let your conscience dwell on this.

Syrian refugee crisis: senators call on US to take in thousands more
Recognizing a Syrian Refugee Does Not Absolve You Mr. President
Syrian Boy And His Dog On The Refugee Trail
Things That Matter 382