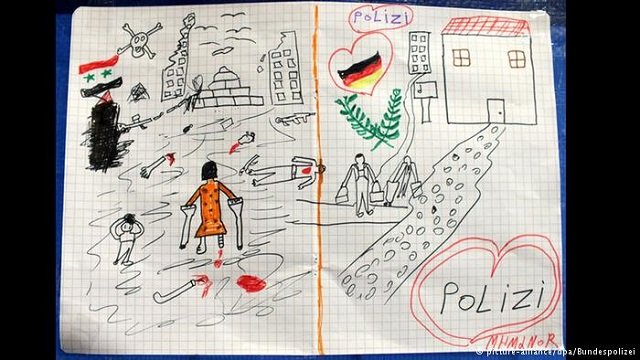 A drawing by a Syrian refugee child has shocked Germany. The picture, presented by the girl to a police officer, shows bloodshed in Syria on one half and hearts and the German flag on the other.

“The picture emerged from the thoughts in the mind of this girl,” police spokesman Thomas Schweikl said, referring to the child’s drawing.

Police said the illustration was made by a girl in the Passau refugee registration center , where officials had laid out paper and color pens for children to paint while they were waiting with their parents.

The girl who made the drawing apparently presented it to a policeman, who pinned it on a board with other children’s pictures. A police spokesman thought the girl’s illustration was interesting and posted a photograph of it on Twitter.

Since then, the drawing has been retweeted nearly 7,000 times. Police posted it with the hashtags #sprachlos and #Fluechtlingskrise – or “speechless” and “refugee crisis.”

No one knows the name of the girl who drew the picture, which shows broken houses and skull and crossbones over the Syrian flag on one side. A girl on crutches, surrounded by a bleeding head and dead people, seems to be observing the destruction. On the right side, one can see a German house with sloping, tiled roofs and the German flag with a red heart around it. The word “Polizi,” a slight misspelling of “police” in German, also has a red heart around it.

“It is possible that the child experienced the events shown in the picture, or she wouldn’t have drawn them otherwise,” psychologist and trauma researcher Tatjana Kolassa told dpa news agency, adding that the girl could be processing the traumatic experience in this manner. Children need protection and routine in the initial phase and one shouldn’t speak to them about the horror they have lived through unless they need it, she added.

According to police spokesman Schweikl, officers often get drawings as presents from children waiting for their turn at the refugee center. Many pictures have the words “Thank you, police,” written on them.

But no picture has shocked them like the Syrian girl’s drawing, which depicts both hope and horror.

Hundreds of thousands of refugees fleeing war and poverty in the Middle East and Africa are coming to Europe. Germany expects more than 800,000 asylum applications this year.