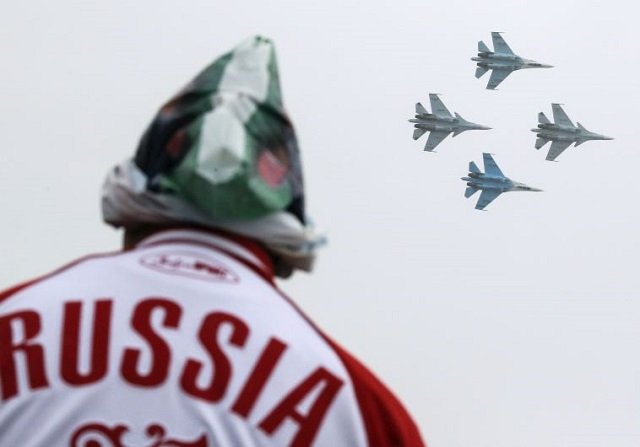 We’re Losing The War, DO Something

September 27, 2015 4:30 am 0
Message to the Alawites of Syria
Did We Reach the Limit of Syrian Tragedy?
The Sickle and the Torpedo

Source: Forbes – by Michael Ledeen (We’re Losing The War, DO Something)

What will it take to get pundits and pols to stop looking at the current crisis as a random collection of national and regional issues, rather than what it is: a global war? They ought to be able to see it easily by taking a snapshot of current events in and around Syria.

The Russians are moving in, with thousands of troops, tanks, and military aircraft. They are fighting alongside Hezbollah (aka Iran), whatever fragments are left of the Syrian Army, and“official” Iranian fighters from General Suleimani’s Quds Force (the foreign legion of the Revolutionary Guards). Plus, they’re also operating in Iraq. Some reports say there is now a joint Russian/Iranian/Iraqi coordinating “cell” in Baghdad, others say Putin is simply coordinating movement in the skies with the Iraqis. The Russians have also installed a “hotline” to the Israeli military, presumably also to stay out of each others’ way. For extras, the Chinese are joining the party, sending an aircraft carrier and accompanying missile ship to Tartous, the Syrian port that has long served the Russians.

Don’t forget the North Koreans, who are working with the Iranian regime to hide its nuclear weapons activities from annoying inspectors from the United Nations. And don’t forget Venezuela, Cuba, Bolivia and Nicaragua, who collaborate with the Iranians to spread radical jihadis throughout our hemisphere, launder money, and rally their followers to combat America.

That’s a potent military, economic and polical force and it suggests that we’re not dealing with mere gestures. Putin and Khamenei, the two main commanders in chief of this adventure, are not given to leading from behind. For both of them, the survival of Bashar al Assad’s Syria is a vital interest, and he’s been losing ground of late to various Islamist jihadis, from ISIS to al Qaeda, and groups whose names will soon likely be forgotten by all but the adepts if the key countries get the overall control they are now fighting for.

Two missions underlie this global alliance: hatred and contempt for the United States and its current leaders, and the quest for control over the supply and therefore the price of oil. Russia, Venezuela and Iran are three of the world’s biggest producers and they need to sell more, at higher prices. China has an insatiable appetite for oil, and want maximum control. So the alliance aims at controlling the Middle East, most definitely including Iraq. It is why Saudi Arabia is a prime target for the Iranians, as we see in the post-Hajj diatribes against the Royal Family from Tehran day after day, and various Iranian operations against the Saudis.

Add to this the conviction that the United States is in cahoots with Saudi Arabia to hold down oil prices (I know it’s nonsense, but the Russians and Iranians certainly believe it), and you’ve got a powerful mission that binds together these very disparate countries.

Oil also adds a concrete dimension to the ideological hatred of America that is shared by all these tyrannical regimes. All are threatened by a strong, confident America—its appeal to their oppressed peoples is the single greatest threat to their rule—and they fear an American comeback after the 2016 elections. So they’re in a hurry. So all hell is breaking loose, as we’ll see quite quickly.

We are living in revolutionary times, but we are burdened with counterrevolutionary leaders. The old order, the bipolar Cold War world, is pretty much gone, but the outlines of a new paradigm have not yet emerged. None of the leaders on “our” side of the world, aside from our president, has any sort of vision for the next stage, the new paradigm, and his vision is based on antipathy for American leadership. He will not challenge the Russian/Iranian/Chinese/North Korean/Cuban etc. war against us.

Ergo things are going to get worse, perhaps very much worse. The pols and pundits could help focus our minds by seeing the war being waged against us, and then figuring out how to win it.

We’re Losing The War, DO Something

Sunnis and Shia Can Build Syria Together
The Dealers of Hope
Sarkozy: 8,000 Killed in Homs in 3 Weeks
Western Appeasement 483