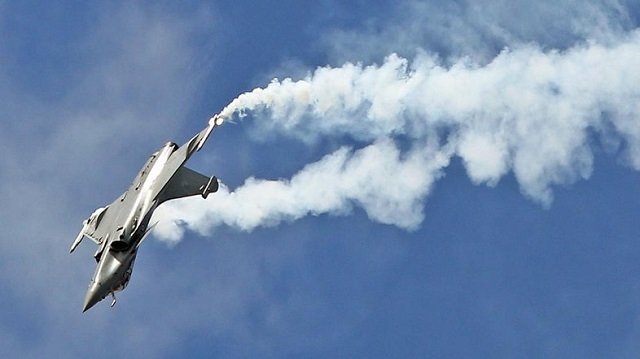 France said Sunday it had carried out its first air strikes against the ISIS in Syria following nearly three weeks of surveillance flights.

The office of President Francois Hollande said the strikes were aimed at targets identified during surveillance missions conducted since September 8.

The operation to “fight the terrorist threat” of ISIS was coordinated with regional partners, a statement said.

“We will strike any time our national security is at stake,” it said.

Vive La France for its strikes against terror.

In an announcement earlier this month, France cited self-defence as its rationale for planning the strikes, while ruling out ground operations.

French planes are already involved in air strikes against the jihadists in neighboring Iraq.

The announcement of the strikes in Syria comes the day before Hollande joins world leaders for the start of the U.N. General Assembly in New York, where the four-year Syrian war is expected to be at the centre of debate.

Sunday’s statement from the French presidency called for a “comprehensive response (to the) Syrian chaos”, saying: “Civilian populations must be protected against all forms of violence, that of Daesh (ISIS) and other terrorist groups, but also against the murderous bombings of Baschar al-Assad.”

Vive La France for realizing all terror must be eradicated including the Assad terror.

Iran and Russia have given strong backing to Assad, whom the United States and European countries such as France see as the instigator of a civil war that has left 250,000 dead and large parts of his country in the hands of ISIS.

Russia meanwhile has rankled the West by strengthening its military presence in Syria in recent weeks.

Washington refuses to accept a peace process that would leave Assad in power and so has backed and armed small “moderate” rebel groups.

But that strategy appeared in tatters after the Pentagon admitted the latest U.S.-trained fighters to cross into Syria had given a quarter of their equipment to Al-Qaeda.

France to support a Syrian buffer zone
Why Is Putin Angry Over France Bombing ISIS?
To France: We Are So Sorry We Elected Barack Obama
Things That Matter 382