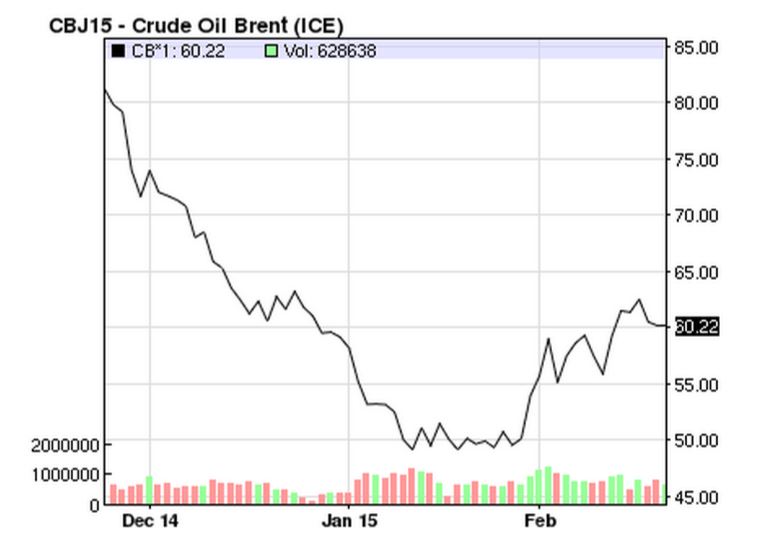 Ever since Putin began stirring trouble in the Ukraine, the price of one barrel of crude oil has been going up from a low of $49 to a high of over $62. What Europe called a peace agreement between Ukraine and Russia, Putin called it “breaking Saudi control over oil prices” by sparking violence.

By fomenting unrest without an all-out war, Putin is betting he can shake the oil futures to reflect the instability he is causing. Too much violence against the Ukraine and the West will slap sanctions against the Russian economy and too little may not be enough to move oil prices upward. The acrobatic Putin is testing western resolve as he drives oil prices higher to suit the needs of the Russian economy and that of his partner Iran.

So far, Europe has not responded because the will is missing. Germany, France, and England know well they have sold the Ukraine for cheap (A reminder of the 1938 Munich Agreement). Having completed the sale, the last anyone of these countries need is to re-visit the issue with acrobatic Putin constantly. So, they sit and watch while acrobatic Putin plays Europe like a harp as he pushes oil prices up to a more comfortable zone.

In similar fashion, Barack Obama has neither the appetite, nor the inclination to add the Ukraine to his foreign policy disaster plate. The last this President needs is another overseas crisis that would divert him from his domestic agenda. So, the acrobatic Putin will keep pushing without crossing that breaking point Europe and the U.S. may reach.

Meanwhile, poor Ukraine is being swallowed by their peasant brethren to their East the way Stalin swallowed Eastern Europe after WWII and turned it into one large medieval village. Ever since WWII, the gentile aristocrats in Europe have started this nasty habit of raising a white flag every time the Russian peasantry threatened their peace.

There are two ways to respond to Putin’s threats.

Europe could man-up by issuing an ultimatum backed by sanctions with teeth. Such would force Putin to hit the pause button enough to bring down oil prices to the $50 a barrel levels. It is not sufficient to ban Putin’s oligarchs from traveling or doing business with Europe. The sanctions must have a direct effect on the Russian economy even if that means the average Russian would be harmed by these sanctions.

Saudi Arabia might want to consider increasing production by a small enough margin to show its will not to be manipulated by Putin’s violent streak. A 250,000 barrel increase in daily production will send a very loud and clear message to the world that Saudi Arabia is serious about keeping oil prices low. The markets will react to such a move and will take into account the will of the Saudis when markets react to oil futures.

Acrobatic Putin is testing our weakness. The longer we permit him to test us, the harder it would be to undo his damage. The world needs fresh leadership to stand up to the bullies on the world stage like Putin, Khamenei, and Assad. The present leadership lacks fortitude and bravery.

Striking Sunni terror but not Shia terror in Syria
The Architect in the White House
One million people wounded, diseases spreading in Syria: WHO
Radicalism 567 Support U.S. Allies 152