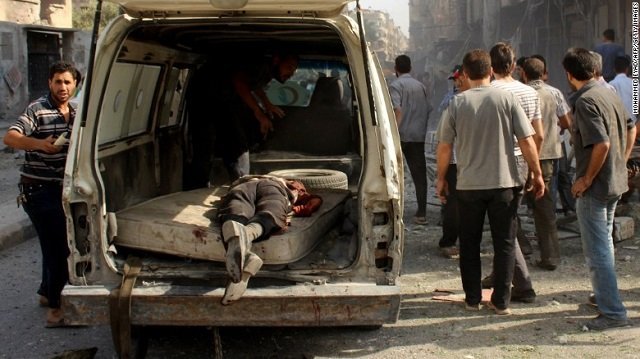 Both Russia and the United States are watching Syria for any signs that Bashar al-Assad might be about to fall — but for different reasons.

The U.S. goal is to avoid a catastrophic collapse of the regime. Unlike in Iraq, the United States wants to try to ensure some elements of the Syrian military and key social services and structures in and around Damascus survive if Assad goes, so that Syria can begin to rebuild.

U.S. officials think that Russian President Vladimir Putin was making the same calculations about the regime’s odds when he began a military buildup there in September. His goal has been to step in and try to keep Assad in place — but also to ensure that if he does fall, Russia has influence in choosing his successor.

President Barack Obama made this assessment publicly on Sunday, telling CBS’ “60 Minutes” that, “We knew that he (Putin) was planning to provide the military assistance that Assad was needing because they were nervous about a potential imminent collapse of the regime.”

But — although a tipping point has not yet arrived — Assad is now pressed from all sides by a variety of fighters, and U.S. intelligence officials think Russia could face challenges keeping Assad in place given the strength of his opponents, including al Qaeda affiliate al Nusra Front and ISIS, also known as ISIL. It’s becoming a multifront war for the Syrians and the Russians.

Right now, near Homs, the United States believes hundreds of Iranian-backed militia fighters and Hezbollah are gathering for a major assault.

A critical area has been the Ghab Valley east of Latakia and Tartus, traditional coastal regime strongholds. Had opposition groups in that valley pushed over the mountains to the west, those strongholds would have been threatened and perhaps have directly challenged Assad’s ability to hold onto power.

Russian airstrikes continue to be aimed at opening land corridors from Latakia to Idlib and also up and down Syria’s Highway 5, between Idlib, Hama and Homs. The United States sees Russia as wanting to keep that corridor open because of its crucial access to Damascus.

At the same time, the United States believes Hezbollah and Iranian-backed militias have moved perhaps hundreds of additional fighters between Damascus and the Lebanese border to ensure security along that approach, especially around the town of Al Zabadani, northwest of Damascus.

Additionally, the ability of ISIS to hold onto to Palmrya, just 130 miles from Damascus, has unsettled both the regime, and Russia officials believe, on the eastern approaches. The United States is also closely watching similar gains to the south of Damascus.

“Many of the forces that remain in key areas are battle-hardened and experienced fighters. This includes not only ISIL, but the moderate opposition, Nusrah and Ahrar al Sham,” a U.S. intelligence official told CNN.

So far, the United States doesn’t believe the regime has recovered significant ground in key areas since the Russian bombing began.

“Airpower alone is unlikely to turn the battlefield in Assad’s favor. His army is depleted and demoralized,” the official said.

“While some tactical swings along the front lines may favor the regime in the near-term, pro-regime forces face significant challenges in loosening the opposition’s grip on territory it has held for months, and in some cases years,” the official said, pointing to the many provincial capitals occupied by Assad’s army that remain under threat.

The intelligence community’s assessment of the impact on Putin of his still-emerging Syria campaign includes “the risk of escalation and deeper involvement in the quagmire if early efforts stall out.”

But the stakes for Putin have only become higher: “It is not just a Russian-backed failed regime at risk; it is now Russian prestige on the international stage,” the official said.

He added, “There is a risk of extremist backlash from the hundreds, maybe thousands, of foreign fighters from Russia and its near-abroad who may return to strike Russia at home.”

And that’s not all. “There is a domestic political price as causalities mount,” the official warned. “In the modern age of social media, one captured Russian soldier paraded by extremists could shock the Russian population.”

Rather than predicting Assad’s fall, U.S. intelligence is trying to assess at what point the opposition groups have made enough gains that Assad could not recover. The regime had reached the point where it is not regaining control over lost territory.

The United States has been concerned about the prospect of Assad’s fall for at least three months, with that worry growing in recent weeks because of worsening conditions in Syria for the regime, according to several U.S. intelligence officials.

The prospect that Assad could soon be pushed out of power emerged as the battlefield shifted on all sides of Damascus. Al Nusra Front, some moderate opposition groups and ISIS have all pushed closer to the capital or made gains along key roads leading to Damascus. The result, officials said, is that Russia is now focusing its bombing and ground campaign to push back gains by opposition forces in specific locations.

In some cases, “Russia’s deployment of airpower comes after Assad backers such as Iran and Hezbollah have poured in resources and bodies,” the intelligence official said, noting that those efforts failed to stem Assad’s losses.

He said that the Russians appeared to be continuing to focus on pushing back recent opposition gains in northwest Syria, since “those gains represent the most proximate threat to the regime.”

The official continued, “Reports of pro-regime offensives buoyed by Russian airstrikes in and around the provinces of Latakia, Hama and Idlib — among others — are the clearest signs that Assad and his allies are looking to reconnect regime strongholds that had been lost by opposition gains made over the summer,” the official said.

“Russia’s apparent focus on strengthening regime strongholds along the Syrian coast, and resecuring key sites beyond the coastal mountains, would shield Assad’s base of support, while bolstering Damascus’ fragile confidence.”

And because nobody knows when, and if, Russian and Syrian firepower can change the areas held on the map by opposition forces, no one can predict where Russia’s campaign will go next.

What if Assad survives?
Why Bashar Assad Won’t Fight ISIS
Syrian Christians: They Don’t Need to Be Caught Between a Regime of Terror and Intolerant Islamists
Putin Terror 436